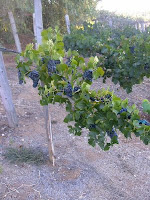 2008 Petite Sirah
Source: Don's Vineyard (Valley Center, CA) 550 lbs. picked (our portion from the total yield of 2,100 lbs. ). 500 lbs. must. 23 brix. Acid: No adjustment required. Ph: in the range. Estimated yield: 34 gallons. Picked on hot day (90 degrees), 9/6. Temperature of must at winery: 85 degrees. Warm soaked 24 hours (decided to get the fermentation started before it took off on its own). Pressed 9/14. Very deep, purple color, inky color. Approx. 30 gallons of "free run", 5 gallons of pressings and 3 gallons of heavy pressings. Blended in 2nd year French Oak barrel (30 gallons) to create 2008 Petit-Petit.
2008 Petit Verdot
Source: Arroyo Vineyard (Bonsall, CA)
Harvested Saturday, 9/14 in 66 degree temperature. Approximately 1,800 pounds. 23 brix. Fermentation started Sunday evening, 9/15 under the full moon. We pressed 9/19 in the evening and 9/20 in the morning, obtaining 120 gallons of "free run" and 10 gallons of "pressings" (which are stored separately). The "wine" tastes wonderful already....Racked into one neutural barrel of American oak in October. 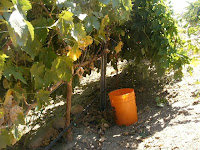 lue-Merle Vineyard (Estate Grown!) 50 lbs. Notes: Picked on a hot day (over 90 degrees) in the afternoon (9/6). Had to fight the bees for the Petite Sirah. There was a row of grapes hidden by the giant, overgrown, Ent-like, "big herm" vines which the birds never pecked (they couldn't get in there) and I grabbed from the bees doing my Winnie The Pooh imitation. The Grenache grapes were not damaged. The zin was in good shape. The yield from crush and pressing was only about 3 gallons of must. To make it over 5 gallons, Jim from Fallbrook -- who was crushing 800 lbs. of white Chenin-Blanc grapes at Mike's -- donated 3 gallons of white must. Folks, this is an experimental wine -- our first blush. Let's see what happens. (Racked 9/15 ... taste is promising. Malolactic bacteria added. 5 gallons yield + 4-bottles of topping wine. ) Racked again in October and topped. This is tasting suprisingly good as of end of Nov. 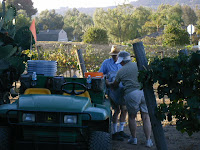 Here's how the harvest went: The pick of the Petit Sirah last Saturday was near brutal. Not quite, just near, as temperatures quickly climbed to 93. Fortunately there were 10 of us: Merlot Mike, Nancy, her brother Mark (who makes an annual pilgrimage from Wisconsin to help), Paso Robles Bill, Fidel, Don, Don's wife, Nancy's friend, the Queen and a Gator (that's a 4-wheel vehicle that goes all over the vineyard). It was an exercise in vineyard disease: Many of Don's vines are suffering from Pierce's disease, and are shrivelling (not his fault -- the infection was brought on by sharpshooters before Don purchased the property a few years ago). The grapes on the vines are also shrived. At first 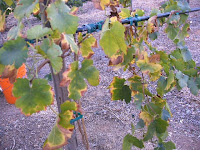 glance, you think, ah, raisins, "sugar bombs." But that's not the case. The taste of many of the so-called raisins is bitter, because they could never absorb water and grow (because of the disease). Still, award-winning wine was made by Merlot Mike out of these grapes -- and I'm anticipating success with our Petit-Petit blend from last year (50% Petit Syrah and 50% Petit Verdot). We started at 7:30am... I believe we finished around 11:30am -- over 2,100 pounds. We loaded up the trucks -- it took two pickups and an SUV to [barely] carry all the lugs -- and headed to Merlot Mike's for the crush.
The next morning we were up again at 4:30am to head down the mountain to Gerry Meisenholder's beautiful Arroyo Vineyard in Bonsall. The healthy, green vines were a stark contrast to what we had seen the day before. And, we were treated to fog and 60 degree temperatures as we descended down the mountain. The Malbec grapes were plump and tastey. A little more ripeness would have been perfect, but Gerry's Malbec has thin skin. As the sugar rises, the bees assemble. So, there's a choice: pick early and grab the fruit (with lower sugar) or wait and battle the bees. Last year we battled the bees, and lost 1/2 the fruit. This year, we picked a little early.
It's been a long week of picking, crushing, stomping, schlepping, sweating, tasting, fermenting, and punching grapes, and it's just Thursday. There's the daytime job, it's getting late, and THE BIG HARVEST is this Saturday.
Question for the day before calling it quits: What's the difference between Good Merlot, Fine Merlot, and Blue-Merleot wine? Good Merlot is crushed by the bare feet of Nubile maidens. Fine Merlot (the specialty of "Merlot Mike" Dunlap and the Escondido Sunrise Vineyard) is crushed les seins of beautiful Nubile maidens. Blue-Merlot is crushed by the paws of Bluey, the Blue-Merle himself, and includes "hair of the dog" at no extra charge. Call it branding.
Posted by Craig Justice at 6:21 PM

My family and I make a Zinfandel wine. Our wine's shelf life is obviously not as long as wine that contains sulfites or other additives. We just opened a bottle of 2000 and it had not withstood the test of time; however, our 1999 bottle was quite delicious. Any wine made prior to 1999 though is no longer drinkable. Obviously prime storage conditions help preserve the wine but it’s hard to say which years will withstand and which ones won’t.

Luckily we don’t run into this issue too often. Since we only make approximately 55 gallons a year (which equates to about 7 cases a partner), we don't have many bottles left from one year to the next. We set a couple bottles aside each year for historical purposes but we try to consume the rest in a reasonable time so that the fruits of our labor (excuse the pun) don't go to waste. Every now and then when my family celebrates a special occasion, we’ll try one of the older years and it’s basically a crap shoot, but it certainly is fun trying!

We’ll be purchasing grapes within the next couple weeks and I can’t wait to start making wine this season. Craig, it sounds like you’ve started already?!