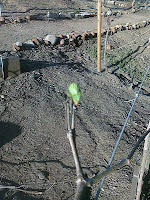 For me, Spring Training in the vineyard is when the rookie vines show up and tentatively throw the first green shoots. The timing this year is particularly auspicious as the recession is officially over and the stock market is up and green shoots are sprouting all over the economy. As the economy goes so goes the vineyard. All the pruning is done, mostly. All the dormant spraying is done, mostly. And the first shoots of false bud break, just like false spring, have arrived. 8 days ago we began a heat wave where temperatures shot up and over 70 F degrees most days, but sanity and cool temperatures and rain returned on Friday evening 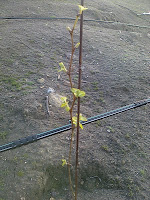 (without intervention from the Federal Reserve), and more rain is in the forecast tomorrow and for next week. (And yes, we're freezing in our hovels again, so don't be jealous of the backcountry people in San Diego -- we're shivering just as much as you are; at least we think we are and it feels that way.) Real bud break, when the star vines show up and send forth their arching tendrils skyward and real Spring are due next month and Opening Day not long after that. Meantime, let it rain, let it rain, let it rain.
Posted by Craig Justice at 5:42 PM

It's looking like the ides of March will bring forth many green shoots!