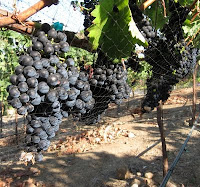 You heard about the Beer Summit held at the White House last week, but do you know about the upcoming Wine Summit? First, a recap of the vineyard news.

While waiting for the harvest of our first crop, I compared myself on Twitter to a nervous, about-to-become-a-father in the 3rd Trimester not knowing quite what to do. My comment resulted in several offers from baby goods suppliers and I began to think hosting a "berry shower" for the first crop might not be a bad idea. I could invite Joe the Wino, Merlot Mike, Coyote Karen and the whole cast of characters from Blue-Merle Country and instead of a crib they could bring a crusher destemmer. Instead of a pram, they could bring me a Gator. Instead of baby bottles they could bring me 750 ml Bordeaux green glass push up bottles. Instead of a rattle, they could bring me a shotgun. And, best of all, instead of formula they would bring fresh mother's milk from the nymph-maidens who crush the grapes at Merlot Mike's with their fine breasts when making the Fine Merlot(TM) wine he's patented. In the end, the grapes probably know best what to do, thank goodness, just like a baby swimming through the womb to this world. There was no shower, but the stork from Vintner's Vault arrived carrying more than a ton of equipment including the items mentioned above (less the milk and shotgun), and Merlot Mike saved the day by managing to haul it up the driveway with his Gator. Our cars, freshly washed for once, are now outside again, the sign of a true winemaker. And the Tempranillo grapes, now at 19 brix, probably know best what to do, just like the newborn. Harvest could be in three weeks.

With the grapes hitting 19 brix the bees arrived and the birds have multiplied. I found a large yellow bird inside the netting this morning and as I went to rescue him he fluttered through the row and escaped through a hole. The Queen reported that the bird-brained grape-vultures are crafty and now I believe her. I saw a small sparrow fly half the length of Row 11 (once again inside the netting) before making a Star Wars dive-bombing maneuver cutting 90 degrees right and out, escaping my furry.

A full moon is waxing this week and I've sent out invites to the cast of characters and thought I would also invite the world via Twitter. The idea is for people who enjoy the combination of wine and full moons to share their thoughts about moon-wine as the moon shines. The first RSVP was sent in by Obi Wan Kenobi who wrote, "That's no moon. It's a space station." Thank goodness it's not The Death Star. If you'd like to join the fun search for #moonwine on Twitter (the # mark indicates a group discussion) and tell us (and the world) what you're up to. I think I'm going to write something like: "Ladies, I just finished stuccoing the retainer wall real smooth so it won't rip your stockings as you sit and enjoy the full moon at #moonwine. If they do tear, no worries. Plenty of black-lace bird net available."

Today being Sunday I learned what Jesus meant when he said "love your neighbor." We have been taking care of our neighbor's three cats while they are out of the country. When we visited their home to feed them we found, in addition to the usual bricks in the litter box: an ant trial that extended from the cat food a mile outside; several semi-dried puddles of cat throw-up; several piles of cat "shat" in the home office (some semi-dried, some mushy fresh). Apparently, as their masters are away the cats will play, and they are pretending to go feral and not use the litter box all the time. Or more likely, they are pretty pissed off being left alone. We cleaned it up, joyfully. I love my neighbors. Really. If the Devil offered me the chance to marry the most beautiful woman in the world with one condition: I must clean her cats' litter box. It's an easy choice: No Thank You!

The Wine Summit
As for the wine summit, it all started when I went to Escondido Joe's on Friday morning for a quick cup of java on the way to my daytime job. A sign stated "Free Cup of Coffee for Anyone Named Joe" and that sounded like a good idea as it's still the Recession and I like saving a penny here and there so I told the waitress, "My name is Joe The Wino -- I kid you not." To which she replied "Oh no you're not. The real Joe the Wino is here right now." As my stomach dropped a foot caught in the lie and I stammered, Joe emerged from the washroom. I hadn't seen him in weeks. "Joe, good to see you. It's been months. How you doing?" We banged knuckles and exchanged a manly shoulder bump. It was good to see him.

"This country's headed in the wrong direction," he started. "If Congress passes this health care legislation and they start taxing me more to offer health insurance to our employees, I tell you, it will just be cheaper for me to put everyone on the government plan. We provide our team members the best insurance in the country and I'm proud of it but at some point everyone is going to be insured by the government. This country is going downhill.'

I wanted to ask him about the uninsured but I know Joe and he wants nothing to do with it so I humored him with one of my pet peeves. "You know I support the President, but I tell you, this cash for clunkers is about the stupidest thing I've heard of and it's the straw that's going to break the camel's back. Enough is enough."
"You're right. They're just taking our tax dollars and helping people buy cars they're going to buy anyhow sooner or later. What a waste of money."
"Why doesn't the government start a program to give $4,500 to farmers so they can go and trade in their wheelbarrow for a Gator?"
"And a bottle of wine for every household."
"I'll drink to that."
"Joe, I haven't seen you in a while. Where you've been? Hiking the Appalachian trail or visiting Evita in Argentina?"
"Alaska."
"You rascal! I knew it! You've been with Sarah haven't you?" As Joe was explaining to me how he's been advising Sarah Palin and donating to her election campaign in walked a policeman looking for a free cup of coffee.
"Is you name Joe?" asked the waitress.
"No, it's Captain Smith. Is your health permit displayed?"
Joe overheard the conversation and interjected, "Tell her your name is 'Jo Mama' and she'll give you a free cup," to which, Captain Smith, a police officer of color took great offense and before you could say Jammin' Joe he was in handcuffs and being escorted to the station. You know the drill by now: Captain Smith claimed that Joe was out of line and causing a raucous. Joe says he did nothing wrong and was wrongfully arrested. Sarah Palin has invited them both to Wasilla next week to see if they can settle their differences over a glass of wine. The press is already calling it the Wine Summit, and there's been great speculation about what wine Sarah will be drinking. I know Joe will throw me a bone and ask for a bottle of Blue-Merle, and Sarah being an advocate of free trade and free commerce will probably encourage the shipment of our best vintage across state lines in violation of federal and state laws to make a point of free trade and freeing the grapes.
"Joe, will she be drinking Bitch Wine?"
"She's got the balls to do it, but since it's from Australia, I think not."
"K Syrah, Sarah."
"Amen brother."
Posted by Craig Justice at 1:28 PM

have had the same experience with 'Houdini' birds here.
My God!!!! 19 Brix???? May be only my Orange muscat is showing some veraison...my reds, nothing.
Where I work in Oakville we have about 40% veraison...oh to be in San Diego :)

Hello Vinogirl. Hope to see you and everyone from Vinoland at the upcoming winesummit. (What will Sarah be drinking?) We must be at 20 brix by now, and a small block of Petit Sirah is ready already, I'm sure. (Just a small block.) Good news bad news about that sugar ... the brix are moving up, the acids are moving way down. So, the challenge to good winemaking down here is acid adjustment. Just purchased a pH meter from Vintner's Vault, and more acid titration kits, so will be doing measurements this weekend. P.S. found one of Alvin's friends (the CHIPMUNK) decomposing in the bird nets this morning. Crafty critters!

You should write a book :)