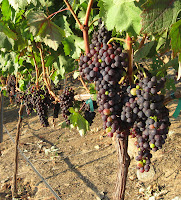 Good record keeping is part of being a good steward of the land and a good winemaker. Keeping records is also a requirement to achieve "sustainable vineyard" designation. I've decided to post records of significant vineyard events & milestones under this journal headline, returning periodically to update. (I keep similar records of wine vintages as well.) Alas, no life and death stories today; just dreary facts. I am reminded of my friend Dr. Hugh Straley of Seattle who once observed, " When marathon runners get together they discuss their bowl movements." When I see my vineyard buddies this week I'll say, "I'm going through veraison." (I describe veraison as the grape's version of menopause as they make that transition from young, hard, green-pea to mature, luscious nectar, with heat flashes to boot.) To which the other grower asks, "What are the brix?" The Tempranillo (which means "early" in Spanish) are about 95% through veraison today, and yes I'll go out and measure the brix after I finish this post, and finish paying the bills (yes, there is that).... A few hours later.... The brix are at 15 and just for fun here's a little video showing how I picked the berries and measured the sugar.

Last water in 2008 (mid-Nov., 2008)
Good rain storms November, December '08
Jan 30th started pruning in earnest, finishing February 14th (mostly)
Feb 21 - 22 (last major rain) Finished all pruning. Finished rain. Total season rainfall less than normal after getting out to a great start, about 8 inches.
Feb. 28 - March 8: Sprayed lime sulphur and oil
April:
Planted about 40 Tempranillo Vines. (About 30 of these were a mistake and will be transplanted in winter.)
Bud Break: March 21. Lower part of vineyard (Petit Sirah), first bud break. Also, lower part of Petite Sirah on less vigorous root stock are netted early July. (Much mildew damage there).
April 17: Admire Treatment First Irrigation. Glassy wing sharpshooters appear in early April. Also, in July after setting yellow traps we catch 5 sharpshooters in one week. In August, the sharpshooters are gathering around the two rows of Tempranillo vines which have found their own source of water putting out green shoots. Cannot add Admire -- too close to harvest. This could be a problem.
2nd Irrigation two weeks later. (in hindsight, this one unnecessary)
May Water Usage: 26 HCF, 53% decrease from May 08 (May weather unseasonable cool, foggy, cloudy.) Vigorous growth throughout vineyard --especially lower Tempranillo and Petit Sirah on 5C rootstock--and should be able to cut back irrigation even more next year.

Planted 18 "potted" Aglianico vines end of May to fill in gaps.
Powdery mildew developed in late May (should have been spraying. Must implement spray program next year.) Treated with 10 pounds wettable sulphur and 2.5 lbs. Kaligreen, spraying June 10 - June 17 with backpack sprayer. Sunrise Vineyards management sprays with Rubigan on June 26th (whole vineyard in less than two hours).

June--Petiole analysis of Zinfandel block. Results show nitrogen deficiency, which can be remedied by composting. (Will order compost in fall for nutrition and erosion control.)
June Water Usage: 46 HCF (15% under water rationing allotment of 54 HCF).

August 1st: Tempranillo at 19 brix (100+ berry sample); taste is still tart. Will we be harvesting in 3 weeks? Petit Sirah lower block is already ready, but since block is small, holding back. Two lower rows of Tempranillo have found a water source, putting out green shoots. (Not good.) Must cut irrigation to them next year. Birds are finding holes in nets and penetrating, causing damage. Bees have arrived. Irrigated 1.5 hours (2 gallon/hr) this week. (Just one hour last week.) Zinfandel at 70% veraison. Grenache at 50% veraison. Aglianico still mostly green. Will drop most of the fruit. The Lord giveth and the Lord taketh away. Blessed be the name of the Lord.

August 26 (Weds): Tempranillo at 24 brix. pH= 3.75 acid (TA) = .7 Acid test done with Accuvin quick test, so accuracy is questionable. I also question accuracy of pH meter. (Will need to recalibrate.) Temperatures have warmed up since Sunday into the mid-80s, reaching 90+ today. No water last weekend. Grapes are ripening quickly now. Many (but not all) of the grapes damaged by birds have become sweet raisins. This may add "jam" characteristics to the wine and raise sugars.
Last week in August heat wave. Temperatures climbed above 90, close to 100 degrees. Zinfandel grapes dehydrating and at 26 brix on Saturday. Watered for one hour on Saturday to try and bring down the sugars. Mad rush to harvest the Tempranillio & Zinfandel last Sunday in August. (One container 1/2 full of Zin grapes left in vineyard ... must thoroughly check next year, and remind friends/pickers to bring grapes to the center of the vineyard, dumped ton larger containers, which can be easily transported downhill.) Tempranillo come in at 25 brix. Zinfandel come in at 27 brix and cold soak to 28 brix the next day. pH's of Zinfandel & Tempranillio are high. May need to water more next year during August to prevent such rapid ripening, but we'll see. The new wines made from these groups are fruit forward, and taste surprising good for new vines. About 1,100 pounds of Tempranillo, 500 lbs. Zinfandel, 100 lbs. Aglianico are harvested that Sunday. Mid-week, we harvest the Petit Sirah (about 400 lbs.) and the next Saturday (Sept. 5th) the Grenache. Full account of the wines (including brix, TA and pH is kept in the 2009 vintage log.) Some remaining Aglianico grapes/raisins used to raise sugar of Ramona Brunello grapes and Valley Center Petit Sirah grapes.
September watering: heavy watering after harvest. Seems to have been much stress on some of the vines, because of heat wave. Will need to see how they recover. Removed emitters from over vigorous vines near leach fields; and gave .5 gallon emitters to some other vines near leach field.
Sharpshooters in lower part of vineyard (Tempranillo mostly, some Petit Sirah vines) in August concentrated on over-vigorous vines. This is serious. Not sure yet of damage caused and extent of Pierce's disease infection. (Until now, it seems we've lost about 3 vines to PD.)
November 1, 2009 - Last deep watering. Water usage for October, including Nov. 1st watering was 35 HCF. Bill for October watering is $135.82 (Bill for September watering is )$173.62.

More later.
Posted by Craig Justice at 4:30 PM No comments:

Growing Grapes Is For The Birds. Or Maybe Not. 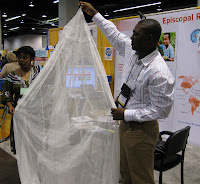 I've been thinking about nets and their useful purposes. An African man and woman demonstrate a mosquito net for life at the Episcopal National Convention explaining how millions of lives can be spared from malaria with an inexpensive, simple net. Earlier in the week when serving breakfast at a food bank I wore a net over my head and not one hair from my follicular-challenged scalp fell into the salad. And as I wrapped and tied nets around the first rows of vines, my mind dreamed of black lace stockings on a loved one's legs.....

Back to reality: As the vines in Blue-Merle Country were the first to break bud back in March I shouldn't be surprised that the grapes are already turning purple and flocks of birds gathered in the Poplar trees at vineyard's edge to plan their assault. To the disappointment of the perfectionist Queen, our Bluey, the Australian sheep dog and 9-time award winning winemaker, is not a "bird" dog and proved useless. (As a distant cousin of Wiley Coyote, he's only interested in the Road Runner and Bugs Bunny.) There was nothing to do but take a break from the cluster thinning, the mildew cursing and the leaf pulling to bring down one of the nets purchased from Sandra of Old Coach Vineyards. 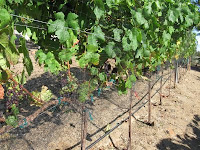 ery conscientious about the nets, and she had rolled them meticulously on a PVC pipe. By attaching a metal pipe to either end of the PVC pipe, two people can stand on either side of a row of vines and unwrap the netting on top of the vines. For the fourth time since Michelle Obama ran for First Lady I am really proud of my wife as we were able to unroll the net successfully until we came to the growing oak tree in the middle of the vineyard which created an obstacle we surmounted. When there wasn't a tree in the way the net unwound smoothly and we'd go back and pull the net from the top of the vines and join them underneath with ties. And it was tying those nets that I was reminded of manipulating black laced stockings another time of my life ....

Back to reality: The vines are not thick and not overgrown at the lower part of the vineyard but four rows are a veritable jungle rain forest and you never know what lurks in the midst. A pack of rabid coyotes? An escaped bear from a circus? The lair of the neighborhood mountain lion? There is a school of thought that says you don't cut back vigorous vines, because it will just force growth into laterals. And there is another school of thought that says it would be nice to be able to walk down the rows and we need to let light and air pass through as a hindrance to the return of mildew. We decided to ask an expert for advice and he said go ahead and "trim" them -- note the word "trim". So that Queen of ours took her machete and she went on a rampage and began hacking, sawing and cutting vines. Now this woman is not very tall, so she was cutting the vines under the top wire in some cases and what we were left with looked like a well hedged garden wall from the castle at Versailles. She had given the vines a military crew cut and they looked good enough to start charging admission to let the neighbors have a look. But are there enough leaves left to allow photosynthesis and the maturation of a sweet, delicious grape so that the Blue-Merle can make more wine and win more competitions than Tiger Woods and Roger Federer? Maybe I should just grow grapes for the birds. That is, after all, what mademoiselle vine wants to do, all decked out in her black lace stockings.

I have these nets and I might as well use them. I think I'll also borrow Joe the Wino's shotgun as it gets closer to the harvest just to give the crows a little warning now and then. Nevermore. Nevermore will you dine on the fruit of the vine. Meantime, Sandra from Old Coach Vineyards will have established colonies of hummingbirds in her vineyard to ward off other birds, and she'll identify which birds are in her vineyard and broadcast recordings of their distress call. As for us, "Owl" Gore -- our very capable barn owl, only works at night and is focused on field mice and everyone else's gophers except ours. Perhaps what I need is a great horned owl (code name: "Horney" Clinton), to chase the birds. But how will we keep this guy from taking down the laced stockings of mademoiselle vine?

(How would you suggest we deal with the birds in Blue Merle Country?)
Posted by Craig Justice at 8:56 PM 3 comments: