..."Speaking of olive oil,” said Paul pointing to a grove of Picoline and Arbequina trees, “I call this our Mount of Olives. Bishop, you’ll appreciate we created a theological garden.”
Paul pointed up to Golgotha and the Cross of Calvary at the summit, and beneath it, a cave symbolizing the Tomb of the Holy Sepulcher. The president pulled a ripe olive from a tree and popped it into his mouth before Paul could stop him. ​“Damn, that’s the bitterest thing I’ve ever tasted,” Obama said, spitting the remains to the ground.
​“I was about to warn you not to eat it,” said Paul. “It needs to be cured before eating. Don’t worry, we have estate grown and cured olives on today’s menu.”

Excerpt from forthcoming novel About That Wine I Gave You during the fictitious presidential Wine Summit. 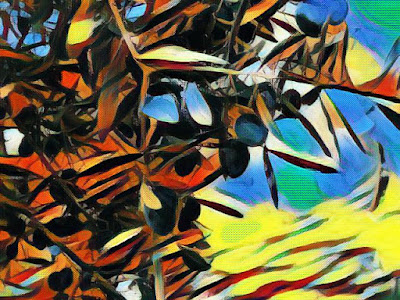 Posted by Craig Justice at 10:02 AM No comments:

Email ThisBlogThis!Share to TwitterShare to FacebookShare to Pinterest
Labels: About That Wine I Gave You, Olives, Wine Summit

Birth, childhood, adulthood, death – the annual circle of life commences as winter’s water, nutrients, and life-force surge from the earth through the trunk to the dead-ends of cordon arms, against the dead-ends of cul-de-sac buds, and probe for an escape; and like a volcano with rising lava, pressure builds, soft lava pressing, pushing, and after pruning, there are no long canes, no branches for that flow to go and buds start to swell, imitating a pussy willow’s furry catkins, the rising dome of a sleep-walking volcano – Marine helicopters from Camp Pendleton circle above reconnoitering the growing dome – will Mount St. Helens explode again? – until the inevitable happens: one pops – the first pop of popcorn – pop, pop-pop – second and third rounds of popping as corn warms over the fire – and soon there is machine-gun popping, chainsaw weed-whacker-sputtering-engine of popping – pop-pop-pop-pop-pop-pop-pop-pop-pop.
Welcome to budbreak in the vineyard. The first shoot emerges – a lonely shoot – a pioneer – sparking a celebration among the vintners at the first sign of spring. (Beware the grasshoppers – they’re celebrating too.) The first shoots of spring– the first pops of popcorn– will give way to summer when small shoots grow into a forest.
A new spring. A new year. A new vintage. Opening day. April Fools! This could become the best wine ever. All contained within a tiny bud of a dormant vine. 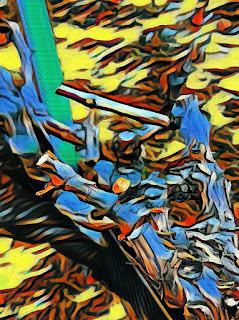 Posted by Craig Justice at 6:44 PM No comments:

On the either side of the hill, as Joe the Wino cut canes, he thought of pruning his company. Too much dead wood. Weed out the lower-performing 10% to make the company more vigorous. Off with their heads! If only cutting staff was as easy as vines – thank goodness I’ve got HR for that. Snip. Cut. Prune. Bend. Shape the vine. Strengthen the organization. Joe was a builder of businesses, a job creator. But the goddamned President has been a job killer bad for the country. Thank goodness his time is up next year. 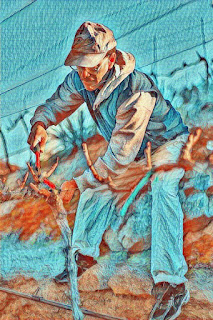 Posted by Craig Justice at 2:34 PM No comments:

Email ThisBlogThis!Share to TwitterShare to FacebookShare to Pinterest
Labels: About That Wine I Gave You, pruning

Of Oranges and Tangelos

"Each morning, Bluey walks with me up the hill where I pick an orange and peel it, his mouth salivating. He takes a slice from my hand. He loves oranges. He eats everything I hand him. Paul says you’re not supposed to have citrus trees in a vineyard, because sharpshooters roost there in winter and kill the vines. When I saw him walking up the hill with a chainsaw I shouted, “What are you doing?”  He was going to cut down our orange trees! I told him to leave the orange trees alone. They’re here for a reason. They’re tangelos, actually – a hybrid of grapefruit and tangerine – and the fruit is delicious. In winter, young tangelos taste tart, sour as lemons. But the fruit that hangs until summer is very sweet. I’ll squeeze fresh juice for breakfast and after a day in the vineyard, I’ll squeeze one into a glass then pour in a shot of our home-made tequila – it’s grape moonshine – and walk to the gazebo with Bluey and watch the sun set. The juice is so sweet, there’s no need to add triple sec and it’s a perfect home-grown Blueyrita." 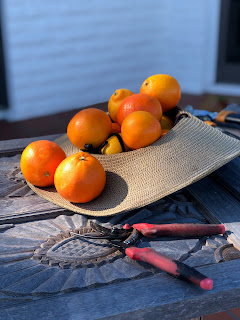 Posted by Craig Justice at 11:27 AM No comments:

Email ThisBlogThis!Share to TwitterShare to FacebookShare to Pinterest
Labels: About That Wine I Gave You, Oranges, Tangelos

“... he speedily cut down an entire row with loppers, without pausing to pull down canes dangling from the wires, left blowing in the wind, swinging like chimes, sounding dull thuds when colliding. He looked down the row, reflecting on Billie Holiday’s melancholy:
California vines bear strange fruitSap on the wood and sap at the rootGophers swinging in the ocean breeze
Strange fruit hanging from the vineyard trees.” 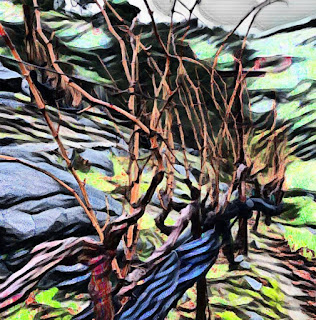 Posted by Craig Justice at 2:05 PM No comments: