John the Avocado Grower from New Zealand paid a visit to Blue-Merle Country over Thanksgiving weekend with his wife and son. I invited Joe the Wino to join us for some gophering and wine tasting. Joe likes New Zealand wine, and often flies to Wellington to go skiing during our summer (their winter.) Joe said he was playing in a golf tournament. I couldn't believe it. "You don't play golf well enough to play in a tournament."
"I've been taking lessons with Bruce," he replied. Macadamia Bruce is our local Macadamia tree grower and nut vendor who is a golf pro with a golf-course on his 4-acre plot that winds through his macadamia grove. Some of the holes are tougher than Pebble Beach.
"What tournament is this?"
"It's a tournament for handicapped and blind kids -- I think I have a chance to win!" he said erupting in laughter. Joe thinks he's a comedian.
"Yeah, I read that joke on the Internet too."
So, without Joe's humor or presence, we were left to entertain the Kiwis by ourselves. Although we didn't strike back at the gophers as planned (the gophers started this war in 2006 with a ruthless attack on the lone, surviving, 25 year old kiwi plant on our property), John's son the U.S. Navy helicopter pilot volunteered to lend us some napalm. We picked up our clippers and marched through the vineyard to the boutique avocado grove with me at the front of the line carrying a shovel just in case.
"Just in case what?" Mary asked.
"Just in case we meet Mr. Rattlesnake." It had turned warm again that day, and the Queen had spotted one in the area the week before. They don't have poisonous snakes in New Zealand. Nor do they have gophers. Just Hobbits.
After determining that our favorite avocado trees are "reed" avocados and not the "bacon" variety, then showing us how to prune the avocado foliage to let in more light at the top of the tree, John & Mary took some samplings of budwood to graft onto a free-range, volunteer, avocado tree growing out of control, but which would never yield fruit as it had never been grafted. One of the mysteries of this tree is how it grew so fast and so lush without watering? The general state of avocados in San Diego country is worse than Detroit automakers. Earlier this year, most San Diego growers cut back their groves 30% -- that is, they stumped 30% of their trees -- because of mandatory water cutbacks for growers on the agriculture water plan. One of our neighbors who grows avocados told me they were going to take out all of their avocado trees this winter, because the cost of water is forecast to increase significantly. So in the middle of avocado wasteland, a tree is growing. (I wonder if there's a spring nearby?) The tree had 3 shoots, so we tried 3 different grafting techniques in the hopes that one might work. John sawed off most of the tree, but left a large trunk which still had some branches. Then, he cut a wedge in the top of the trunk, and inserted into the wedge some budwood, which Mary had whittled to expose moist weed. On a different trunk which had been sawed, we placed budwood on locations around the perimeter of the trunk (this technique was recommended by the University of California, Davis). And, on the third, smaller shoot, Mary just simply sliced the shoot in half half and taped some budwood to the shoot, forming one, new shoot. As we walked back to the house, with Mary pulling out clippers faster than the Sundance Kid and snipping every rose bush in site, "Don't forget to go back there tomorrow and place some gauze around those grafts to protect them from the sun."

The next day was warmer and the sun was brighter. After Bluey and I taped some gauze bandaging (aka a paper towel) around the grafts, I started pulling some weeds around the nearby Aglianico vines when I spotted Mr. Rattlesnake slithering in slow motion on by me right down the middle of the row. The Queen had implored me not to behead the beasts. She says that they have spirits and to decapitate them is an ill omen. She could be right. In China, there are 1,000-year old, white, cultivated snakes, who assume human form. There are operas written about this. They are the scourge of men. I know about this, having met one first hand in the City of Hangzhou near th 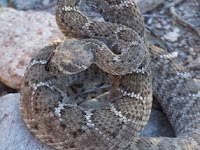 e West Lake. Almost ruined my life. As I considered my dear wife's request not to harm the snake, I realized that my shovel was 10-yards away by Bluey, asleep in the cool shade of the wines. I took a step towards the shovel and Mr. Snake (or perhaps Miss Snake if she were a 1,000-year old spirit from China touting me to return?) picked up speed, and darted under a large boulder, hidden from view. I grabbed the shovel, and did what needed to be done since dogs and rattlesnakes don't mix, and thrust the shovel under the rock multiple times. My assumption is that the snake escaped through a gopher hole, and is out there, hibernating, growing larger, until Springtime.

And then there was winemaking. One of the ongoing tasks is to top the barrels (we have three wooden ones this year). Makes you wonder if you can really classify this as a chore? It involves: removing the bung, sticking your nose into the barrel. Inhale. Relax. Pull a sample of wine with the Turkey-baster-thingy and taste. Spray the bung-hole entrance with a mixture of potassium metabisulfite and water, then wipe the hole. Add a little bit of sulfite solution for good measure (typically, I'll mix in about a quarter teaspoon or so with each topping.) Next, open a bottle of topping wine, taste it, and fill the barrel to the top. (Normally, "the angels" in the winery will consume 1.5 - 2 bottles per month per barrel depending on the temperature -- the angels are more thristy in summer). I was pleased to find "sprtizyness" from the wooden barrel I tasted last night, indicating that malolactic fermentation had kicked in naturally (without me needing to inoculate the barrels with malolactic bacteria this year). And the 2008 Petit Verdot is "bolder" than the 2007. In fact, the 2008 wines are tasting great at this stage, and it's like Opening Day of the baseball season when any team can win and become the World Champion that year. These wines are promising and could win awards, until I do something to screw them up! This happened when I tasted a 3-gallon carboy of Petit Sirah pressings which I had been saving ... the bung of this container had been knocked off (I don't know for how long) -- when I tasted this wine yesterday, it had an "oxidized" taste to it... so I probably cannot use it for topping wine -- but it sure will make an excellent grappa when I find time to take it to the man with the licenced still.

We started a Winemaker's Forum on the business networking site LinkedIn recently, and I'm amazed by the number of business people out there who are planting vines and making grapes. (Misery loves company I suppose.) One of the discussion topics that came up this week was adding wood chips to wine. Lum Eisenman, our mentor in San Diego, uses wood chips all the time with his 15-gallon stainless steel beer kegs. It's an acceptable way for a small producer or hobbyist to make wine. When I was in Australia and NZ this summer (their winter), I met several winemakers using "oak staves" -- these work quite well also, in combination with breathable "flex tanks" -- these are "permeable tanks" which allow the wine to oxidize slowly (as if the wine were being barrel aged). Merlot Mike purchased several of them during this crush season, which are about $300/each for the 50 gallon size and $400 for the 100 gallon size. About small, 15-gallon wooden barrels, STAY AWAY FROM THEM! (It's a long story.) It's much easier to use the 15-gallon beer kegs. Hint: have a keg party and "forget" to return the keg (forfeiting the deposit as payment).

We used French oak wood chips in our "neutral" 60-gallon barrel last year. In the past, I would just put the chips through the bung hole into the barrel and let them settle at the bottom. (I would use about one pound of chips.) After bottling, I'd manage to get most of the chips out. (Remember, I'm the guy who always makes mistakes when making wine, so I'm not saying this is the best way to do it.) This year we tried something different... I had a very low-tech net/nylon type of stocking, and a special bung that had a protrusion, so that I could "tie" the wood chips in the stocking to the bung -- this kept the chips from going all over the place at the bottom of the barrel -- and made cleaning the barrel much easier when we bottled. In fact, we didn't clean the barrel at all this year ... we just put the new wine into the freshly emptied barrel this year -- because we were so tired at that point. Check out future editions of the Winemaker's Journal to see if that was a mistake, or resulted in award winning wine.
Posted by Craig Justice at 5:34 PM 6 comments: