And Now For a Something Completely Different: Author Reading at Happy Hour

At the end of the first full week of self-isolation, an author opens a bottle of Tempranillo and reads from the director's cut of his forthcoming novel. Cheers!

Posted by Craig Justice at 11:12 AM No comments:

Email ThisBlogThis!Share to TwitterShare to FacebookShare to Pinterest
Labels: About That Wine I Gave You, Wine Dogs

A Taste of San Diego Wines After Opus One

This is not a story about competition - it's about the coming of age of San Diego grapes and wines.
RULE: I grew up with a rule that when serving red wine during a meal, the wines should become progressively better, if different ones are served. In other words, save the best for last.
The first time I tasted Opus One was in 2002. I was hosting Japanese business partners at Mr. Stox restaurant in Anaheim, and one of the guests saw Opus One on the menu and ordered it. I had no idea what it was, nor how much it cost, and was pleasantly surprised by the wine's taste. 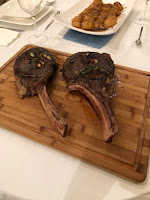 The second time I tried Opus One was two years later, again at a business dinner, and this time I ordered it, and enjoyed it greatly. The bottle went fast between two of us, and I needed to order more. Alas, I didn't have the budget for another Opus One - and ordered a good wine instead. Coming right after the Mondavi-Rothschild masterpiece, the 2nd wine didn't stand a chance - and was clearly a violation of the rule to serve progressively better wines.
To state my tasting preferences clearly: I like Opus One; I also love "big, juicy, cabs" from Napa - rarely drinking them, because of the cost, and thoroughly enjoying them when given the opportunity. I also like our good wines (many of them have not turned out so good over the years). 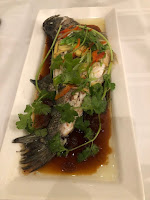 In the intervening 16 years, I've been a winemaker and winegrower. Last night, I was invited to dinner, and as a hostess gift brought an assorted cheese plate and assorted wines made from our "estate" grapes - the wines not to be served, but as a gift.
The first wine served was a 2016 Centered cab. It was enjoyable - well aged for being relatively young (although I thought the vanilla, carmel flavors a little strong). And then came the 2010 Opus One, living up to its reputation, reminding me of a 20-year-old Chateau Lafite Rothschild I drank two years before.  Both wines were decanted 90 minutes before serving. The meal featured tomahawk steaks cooked perfectly. With six drinkers, the Opus One was soon gone, and the host said, "Let's open one of Craig's wines." See RULE above - panic time.
The next course was steamed bass, so I chose a lighter red - our 2017 Merleatage, a blend of estate Tempranillo, Grenache, and Petite Sirah. I decanted it quickly. The musky aroma - as I feared and expected - was totally different than the Opus One. As I took the first taste, however, I thought this isn't so bad, and on the second sip realized this will work. Indeed, the wine made from San Diego grapes was NOT a downgrade from the Mondavi-Rothschild Opus One, and held its own. This is a compliment to the quality of grapes growing in San Diego.
For dessert, the host served fresh, sweet, blackberries paired with a splendid ice wine from Canada that disappeared quickly. I had brought the hostess a bottle of our 10 year old so-called tawny Port, aged for eight years in an old barrel on our back patio in full sun and two years in the bottle. Once again, the San Diego wine - although drastically different than the ice wine - held its own, the nutty flavors pleasing the hosts and guests.
My neighbor Coyote Karen of Coyote Oaks Winery says she started making wine because Napa wines were getting expensive and she could save money making her own. I think we're on the way to doing that, without sacrificing taste or enjoyment. Cheeers, and congratulations, San Diego.


Posted by Craig Justice at 6:58 PM No comments: