Good Friday Down On The Farm

Our friend Greg, Quality Control Manager at the Burrell School Vineyard & Winery in the mountains above Santa Cruz, CA, sent us 3 bottles as part of a wine swap arrangement. I told him the weather forecast was for a Pinot Noir Easter at the Blue-Merle, thanks to his gift. Life is short, and not knowing if Thursday's supper would be our last, we opened the 2005 Estate which I describe as: "Pinot with an attitude." He told us to try the 2004, which was a little smoother -- and I must confess that with 4 ounces left -- which happened to be in my wife's glass -- when she stepped out of the room for a moment she came back to find her glass empty and mine half-full. After making a hint of a compliant, I was obliged to share the remainder with her. The 2004 was smoother, and I describe it as "Pinot with mojo." The proof: I caught a gopher, and Bluey caught a rabbit. This is very serious mojo, as the odds of both impossibilities happening the same day can only be attributed to the wine. Bluey brought the rabbit (actually, a tiny, baby bunny) to me as a gift. I took the bunny in gloved hands and walked up the hill to prepare for the 2nd burial of the morning (concealing the R in my hands to spare the Queen and the awakening Princess from the horror). The bunny was still breathing, so I prepared a bed of hay in an empty flower pot -- just in case he might survive (I didn't suspect Bluey attacked or bit the bunny -- he was probably just trying to play, like a good papa dog rollicking with his little pup). The rabbit started hopping around, so now I planned its release. I hadn't touched him with my bare hands, but he had been covered in Bluey's saliva, so I wondered if his mom would take him back. I walked down to the house and announced to the ladies that the Easter Bunny had arrived -- we all agreed on a release strategy, and I placed the flower pot adjacent to the rabbits' den by the house. Bluey and I went back to the hill and whacked weeds for an hour. We just inspected the flower pot. Empty. No bunny. A good sign. Now we'll see if his mom takes him back. The story of this little Peter Rabbit to be continued.

The day is still young. I've found a perfect place to plant the owl box. The plan is to attach two wooden trellis end posts to make a 16' pole. We'll see if that works. The other major event planned for today is to carry the cross from the bottom of the hill to the top.
Posted by Craig Justice at 9:41 AM No comments:

I came home from work and toured the top of the hill where we planted 30+ Aglianico vines six days ago, and noticed wooden stakes had been driven next to each baby plant and the obnoxious pink grow tubes were neatly in place. For the 2nd time in a week I was tempted to say "this is the first time in my life that I've been really proud of my wife." I was amazed at the transformation that had taken place while at the daytime job. (And reuse of the wooden stakes we used to stake-out the vineyard was economical, as we had run out of the thin metal stakes used to support the young vines.)

I went into the shed to pull out the weedwacker to hack away at some foxtails before dark and I was startled to see a baby r-a-b-b-i-t in the corner. I can't say the "R" word because if I do, Bluey will immediately shift gears into "sheep herding mode", come to full attention, and search everywhere for the "R." I wondered how in hell did the R get inside the shed? I poked around, found a hole in the side, and what appeared to be a den. Wouldn't surprise me to find it occupied by a rattlesnake in a week or so. I was wearing gloves, so picked up the baby "R", put him in a plastic pot, threw in a generous amount of hay and laid the pot down on its side next to the shed (where I noticed a hole going underground).

The "Rs" I don't mind so much; the grow tubes do a good job protecting the vines. (Suggestion: don't remove the tubes during the first year, no matter how ugly they are!) It's the gophers who are a problem -- the word sounds like "tappas" in Mexican, and I'm thinking I'd like to make a meal out of the gophers, who are making "tappas" out of our vines. Just got a call 5 minutes ago from Pat Burke, The Owl Man of San Diego, and he's got an owl box all wrapped up for me, which I'll pick up in the morning. We are choosing the "Owl" Gore method of rodent control, to save the environment by cuting down on the use of poisons. Stay tuned.
Posted by Craig Justice at 9:09 PM No comments: 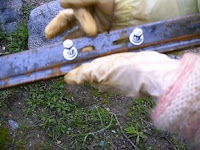 The days it was taking to install cross arms on the metal posts and to string wire were turning into weeks, with costs rising faster than the price of gas and gold. The 2nd planting of the vineyard was over budget. I'm tempted to say "it's the first time in my married life I have really been proud of my wife" as the Queen discovered an improved technique for installing 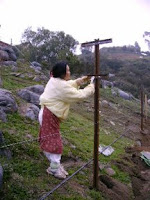 time, saved money and made the job so easy, she fired the workers and did it herself! Damn, is she good! She's filing a patent on this invention, so if you'd like to follow her step-by-step instructions, send your royalty check payable to the "The Blue Merle" (we'll use it to fund continuing education of the workers, so we can hire them back).

In essence, here's what she does:
1) First, attach the screws, washers and fasteners to the cross-arm. Note: You do this first, which you can do inside while watching the candidates debate on CNN in the evening (another time saver)
2) Then you slip the cross arm over the top of the stake (not an easy thing to do when you're barely 5' tall and the top of the stake is 8' above the ground).
3) Then just tighten up the screws, and you're good to go. (No, she didn't use the electric powered screw driver that the workers were so proud of, which somehow took them hours to do what she was able to do in minutes).
Posted by Craig Justice at 8:43 PM No comments: