Advice For Bluey the Wine Dog at 50

Bluey, cellar master of Blue-Merle Winery, hero of The Gopher Wars and Chevalier de Legion de Vin de Chiens qui But, is 50 years old today. It was seven years ago (human years) on Memorial Day Weekend when the Queen caved in to the young Princess, "OK, we can get a dog." Before she changed her mind (again) we picked up the paper, turned to the classifieds and started looking for puppies. This method was slightly less scientific than our Commander & Chef and the results were quite unexpected. We started with A. "Hmmm.... Australian Shepherd," I announced. "Those were the dogs in the movie Babe." (In fact, those were Border Collies. What little did I know.) 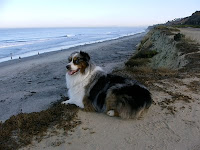 "Oh daddy, daddy, let's get one. I'll feed him every day and walk him," said the Princess. "I promise," she lied.
I called the breeder. "Are those dogs good with kids?"
"Yes, but they might nip at their heels and try to herd them, but they love children."
"OK, hold one. We're on our way." So we piled into the white sedan and drove an hour from the coast into the hot, dusty, dry, country to the breeder's. This little pup with blue eyes came trotting out. "Oh daddy, daddy, he's so cute, let's get him," said the Princess. "I'll brush him every day," she lied. Even the Queen liked him, so they put him into the car, on which he promptly peed. He was a keeper. I took out my checkbook.
"He's a Blue-Merle," said the breeder. "That's $100 extra."
"A blue what?" I didn't know. I didn't care. The Queen & Princess were happy, and I wanted to get this deal done before she changed her mind (again). I wrote the check and we sped off into a future of marathons, vineyards and wine I couldn't foresee which he brought about.
I called up my friend Barry in Australia, whose business partner is also named Barry.

"I'm going to call this dog Barry in honor of you guys unless you come up with a better name."
Barry said, "That dog will change your life." He knew what he was talking about. "Bluey means swag man in Australian." I liked the name. His eyes were blue. He was a Blue-Merle, whatever that was. And the Princess liked the name, too. Bluey, the Swagman. Seven years ago.
I reckon Bluey is 50 years old now in dog years, so here's my advice to him for the next 50 years. (He'll have his chance to give me his advice in July when I turn 50.)
Bluey, you're 50 years old, and it's time to grow up and start acting your age. Here's my advice:
1. Stop eating grapes during harvest. You'll kill your liver.
2. Keep brushing your teeth every night.
3. Don't let other dogs lick your zi-zi in public. It's sooooooo embarrassing.
4. Stop dreaming about making puppies doggie-style with a bitch. It's not going to happen. (And keep your paws off of the beautiful ladies in the neighborhood, too.)
5. Stop asking for permission to go out with the coyotes at night. The answer is no.
6. Cats are not dogs. They don't like having their butts sniffed. Stop trying.
7. If you promise not to tell the Queen, I'll give you the steak bone.
8. I know you think I'm a lost lamb and you have this compulsion to follow me, but you better go to the Queen to snuggle up once in a while.
9. Would you mind to stay away from foxtails?
10. Watch your weight. (See # 11.)
11. Would you mind to stop leaping from 4 ft. walls?

12. Life is too short for bad wine; only taste the good stuff.
13. We're so grateful for the joy you have given us -- please stay away from snakes!
I've spent all my money on wine, women and vet bills, the rest of it, well, there was nothing left. Glad to spend it on you, pal. Here's to another 50 years, cheers!
What advice do you have for Bluey (and the author) on the occasion of their 50th birthdays?
Posted by Craig Justice at 5:29 PM 3 comments:

There's an old saying that good wine is made in the vineyard. To which I add great wine is made by blending. But you can't make any wine without water, at least when you're a grower in Southern California and you don't have old vines that don't need irrigation. With the advent of water restrictions, another dry year and the prospects of global warming, water management is critical. As a grower with a small backyard vineyard the tools I use to determine when it's time to water are 1) looking at the vines (economical, but not very scientific) 2) perhaps a simple tensiometer 3) wait for the Queen who manages our vineyard to plead for the third time to water her vines. I was curious what tools the big boys are using so drove up to Temecula's 100-acre Maurice Carrie Vineyard to meet with Gus Vizgirda, the vineyard manager, winemaker and all-around-good-guy.

The picnic table outside the Victorian farm house had several soil samples in jars. Gus had take the sample

s, added water, shaken, and allowed the samples to settle, giving him an idea of the composition and percentages of clay, loam and silt in various spots of the vineyard. (Now that's something I can do at home.)

Gus had taken another soil sample and inserted it into a 5ft plastic, see-through tube to the 3-feet level. Pouring water into the tube, he's able to see how deep, and at what speed water is able to penetrate the soil. Gus has found that at his 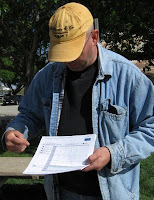 location, he's better off with a very long watering in the beginning of the watering season followed by short waterings later. Because of the initial deep watering, later waterings are able to penetrate the soil better, he said.

Gus' choice for emitters are two @ 1/2 gallon/hour on each side of the vine. Several C-probes, at $2,000/each, are placed 3ft. below the soil surface to measure moisture content and transmit signals to a computer. Gus gets computerized reports showing him green zones and red zones indicating when it's time to water and spray for powdery mildew. (The computer takes temperature readings and calculates when mildew pressure is growing and it's time to spray.) I've heard of other growers who integrate Twitter into such a system so the vines send a tweet when they need water.

Valley growers are on "city water" and coped with a 30% water cut last year. They are likely to face an additional 10% reduction this year. Their land does not include water rights unlike most growers in Ramona (San Diego County) who are on well water. Hence, the investment in water management tools, because you can't make the best possible wine in Southern California without judiciously applying a little water.

What tips and suggestions do you have for managing water use in the vineyard?
Posted by Craig Justice at 4:17 PM 1 comment: