The Spirit of E.B. White Visits the Vineyard

He inspected the bucket of slop expecting to find Templeton floating, preferably belly up. The rat was clever enough to evade the mouse traps set for him on the ledge, his favorite spot for emptying the contents of his colon. The problem was it was also the ledge of the vintner's picture window, which brought panoramic views of the surrounding mountains inside the house, ideally without rat turds sprinkled on the ledge.

Paul knew from experience mice could not resist a water bucket in summer, as he had found a pair the day before baptised with extreme prejudice. Fortunately he found them before his wife who might have been shocked into cardiac arrest had she come across the twin corpses.  It was an aha moment for Paul who devised a plan to catch Templeton, tempting him with water, coffee grounds and kitchen scraps. He set his trap that evening. As the first light of predawn appeared at 5 a.m. Paul woke, pulled on the clothes he wore the day before and stepped outside to peer into the bucket. No swimmer. Disappointed,  he took the bucket to the vineyard to quench the thirst of a vine before emptying the coffee grounds and scraps into the compost pile.

He almost walked through the web, his eyes focused on the ground for a lingering snake, his nose stopped an inch from the sticky string.  A perfect web, glistening with dew drops, he half expected to see the words "Some Dog!" sewn by the spider..... 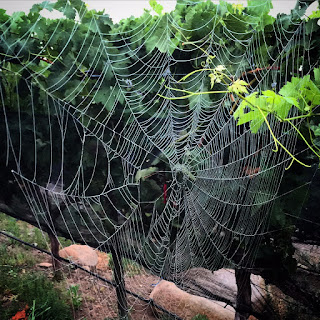 Posted by Craig Justice at 6:00 AM No comments:

And the two vines joined hands walking down the aisle of the vineyard together. 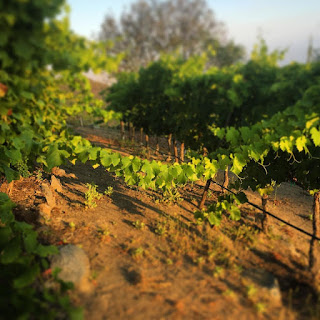 Posted by Craig Justice at 12:39 PM No comments: