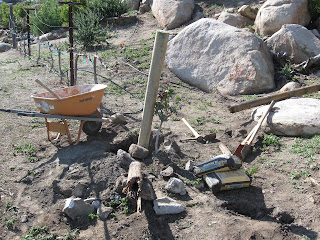 Now that pruning and dormant spraying are done, next on the list of vineyard to do's is replacing damaged poles. I used to think it was my Herculean strength pulling the wire tightener that caused 10 ft. poles to snap, but alas, I have been assisted by termites. (Question: If termites are eating the wooden poles in the vineyard why aren't they eating the wooden beams in our house, or are they?) Digging hole, inserting pole, aligning pole, mixing concrete, pouring concrete is all pretty straightforward. Before this, the pole must be cut from the wires, causing the cordon wire to go limp leaving vines to stand on their own, which they do well when dormant. I want to get this done before budbreak -- which has already started --  before the vines are a host of tender new shoots so easy to break.

Removing the concrete remnant of a 10 ft pole four feet underground is a back-breaking task. Easy enough for me to dig down to where the shovel meets concrete, but with so much wood sticking out, we call in Fidel, that rascal, for the dirty work at 4pm in the afternoon to finish the job. When he's done at 6pm he says, "That'll be $30."

"You always give me the hard jobs to do," he says.

"Why do you think we hired you?!" says the Queen and she's huffing and puffing and can't get to sleep at night carrying on about the nerve of that rascal to request so much when he does so little and what's so hard about the jobs we've given him because we've been doing everything ourselves.

"Of course we hire him for the hard jobs," she complains to me at 2 am. "Otherwise, I'll do it myself."

Another sign that the recession is dead and unwell and not living in Paris. The Big Recession is so 2008 and it's 2012 and it's a great leap-year forward and it's an election year and this economy is on the mend and it's time for everyone to plan to reap the future harvest if you're not reaping already. The Hebrew Bible tells us the story of Joseph who had dreams of 7 years of famine and 7 years of bounty.  Have we not been through our years of famine? Is there not light at the end of this tunnel?

This is America and there's been cycles of booms and busts throughout our history. Is this not just another cycle? Isn't there a rainbow after this storm?

I've been so busy travelling around the world and selling everywhere I go that there's been no time to write about the winemaking adventures of Bluey & Craig and the carrying's on of Fidel and the escapades of Coyote Karen and Merlot Mike. While I've been out of town two new restaurants have popped up on Grand Avenue in our little town filling up spaces vacated during the downturn. Why, even Joe the Wino himself has been quiet these days, unsure what to say because the economic spring is here and the flowers are blooming and he hates the President and it seems he's upset the economy is improving because he can't blame that on the President. I remember last year when Joe, who owns a high tech company in San Diego, laid off more employees (again) from his very profitable firm and the next day the stock market tanked hundreds of points and it was as if he (and his corporate buddies) timed it perfectly and they believed they were economic and CEO geniuses. While they were cutting jobs and speaking venom and putting millions of dollars into their own pockets, the good stewards of business were investing and building their companies and expanding sales and growing exports while Joe the Wino was complaining about Obamacare and telling his employees they could "go on the government plan" and saying the President was "ruining the country" and Obama this and Obama that. He said "Obama is destroying jobs" and raising his taxes and those of his millionaire friends is going to reduce jobs but it was he (Joe the Wino) who was laying off employees, looking out for number #1 (himself), paying the lowest tax rates in recent history and putting millions of dollars into his own pocket as our country's national debt soars.

Who can afford going to the movies these days or to a ball game or to the theater, so for us there's TV (yes, we finally bought one) and our favorite entertainment has been watching those Republican presidential candidates debate as they rant about Obama this and Obama that and how he's as evil as that Holocaust denier from Iran and this is all we hear on TV and after months and months of this, like the Big Lie, with so much repetition it sometimes becomes hard to discern the truth and we were starting to believe what they say and what Fox News says might have some truth to it.

We went outside and pruned the vines and got rained on and hailed on and did our work and thought about things. We heard the cries of the hawks and the barks of our dogs and found enough money to turn on the heat (whenever we could see our breath in the house) and ate bread and beans and drank the $1.99 6-pack beer from Trader's Joe. We drank the wine we grew which is inexpensive for us to make but has an amazing taste and ate way too much cheese to go with the wine and we didn't go to bed hungry though we might not be eating as well as we should. Now if things are so bad and the President is the reincarnation of 666 and a Darth Vader destroying jobs and job creators, how is it that I'm  involved with a little company that started with  2 people in the garage at the depths of the recession and has now grown to 50 people and we started offering benefits and providing health insurance and all the while the candidates are saying that the President has stifled small companies and yet who could be smaller than us and we are growing like crazy. And, after a couple of years of do it yourself vineyarding we've got  a tiny bit of extra funds to hire Fidel for a couple of hours and Fidel is demanding more money and isn't this also a sign of an economy that's turning around?  If not, why are customers and dealers from all over the world demanding our products?  Even our wine sales are increasing, PTL, because we've got to sell all these cases of wine that are piling up.  So much for the pols and the polls. You heard it here first (although I was too busy to right it down last year): good times are coming and make your plans now to join us for our 2nd Presidential Inauguration Wino's Ball (and yes, Bo the First Dog is invited) and before then let's start planning for a bountiful harvest in the Fall.

Fidel came back the next day and pulled the termite bitten wood out of the holes and he worked for less than 2 hours and said, "You only have to pay me $20 today."

"Good, because that's all I have," said the Queen. As he was leaving she gave him two Italian-made chairs which had once served the dining room of a condominium at the Watergate. He put them in the back of his beat-up pickup and drove off, a truce of sorts between them and a sign of the trickle down economics to come.
Posted by Craig Justice at 6:22 PM 1 comment: