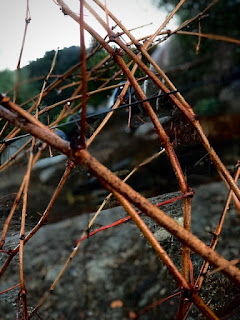 Tap, tap-tap-tap, a single stick rapping a snare drum, the first drops tiptoe from the sky announcing the rainy season, the tap-tap-tapping crescendos to two sticks then double time, the storm accompanied with gusts of wind, hanging fronds of palms levitate, point opposite the sea, guiding rain where to land and a path for howling wind. Pellets hit baked clay; drops gather into puddles; hardened earth softens; gravity pulls drops down the slope, slowed by a sprouting weed here, a clump of leaves there. Two and two makes four, four and four makes eight, eight squared makes sixty-four, sixty-four squared makes a movement, drops band together into a stream, strength in numbers, the people united will never be defeated. How does a waterdrop split a boulder and rip apart a mountain? The same way a single voice crying in the wilderness topples a corrupt regime. One drop at a time.

The drum roll increases, rain falls faster, droplets flow into streams, streams carry dirt particles to the back of a retaining wall, are slowed for a moment, but not deterred. History is on their side. Gravity is on their side. Laws of nature are on their side. Never give up. Downward proceeding never receding water hits the wall then veers in the direction that is down, always heading down, down, down the slope of the hill, some seeping underground, through topsoil, penetrating clay, a superwoman-superman-superperson passing through a concrete wall, the power of water falling from the sky, magic water, blessed water, holy water that has been prayed for, wished for, dreamed of. Dogs dance like children in the rain; a child-like farmer looks up to the sky and opens his mouth to catch a sip and spins circles celebrating the water of life; dogs rollick and roll in the mud, precious mud, rare mud; I have missed you for a year, glorious, red, ochre, paste of mud paint, finger paint, reddish rusty magnificent mud squishing between fingers of a farmer turned kindergartener, drawing finger trails of mud on the stuccoed retaining wall, then shoveling, shoveling the mud, make the paths straight, raise the berms, cut into the mountain, shape the earth while you have the chance, take the shovel, carve a flat trail into the hill, ouch, watch your back, oww, threw out my back, you’ll be visiting the chiropractor, you could have hired a guy to do this work for what you’re going to pay the doctor to crack your back, don’t look back, you could have hired two guys for a month but you tried to save some money and it ends up costing more, because the rain fell and the earth was soft and you had to shovel the mud and carve the path while you could. 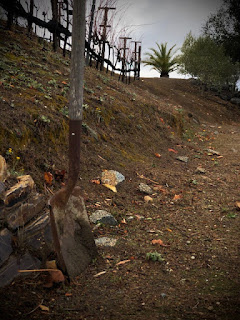 Posted by Craig Justice at 5:14 PM No comments: