(San Diego, CA -- February 24) The Blue-Merle Winery announced it will donate a case of wine to be auctioned by Episcopal Community Services (ECS) to raise funds to educate, feed and serve the needy. "Bidding for the 2006 Nebbiolo will start at $35/bottle," said Craig Justice, business manager for the Blue-Merle. "This is the same wine that was served to Presiding Bishop The Most Reverend Katharine Jefferts Schori during her state visit to San Diego last year -- if it is good enough for the Presiding Bishop, the Pope, and CEOs then the wealthy should pay dearly for the privilege of a sip. Not only will purchasers be treated to a unique fine wine, but their money will go for a good cause," Justice said. It is rumoured that the Bishop will grant indulgences to patrons who drink wine purchased from the ECS auction, reducing their time spent in Purgatory by one week for each bottle purchased.

The agreement for the Blue-Merle to donate wine for the auction was reached at a ceremony to install a new priest at Grace Church San Marcos, CA last week. Justice arrived late to the festivities (on account of driving back from Los Angeles) and snuck into a back pew where he found his old friend Joe the Wino, whom he hadn't seen since they flew to Texas the week before and ran into the law. "Joe, good to see you. How's W?"

"Pretty good, considering. He's looking for work." Joe had flown to Texas for a little golf and hunting with President Bush. After whispering civilities, the two settled back down for the ceremonies to officially welcome a new priest to the church. The Bishop of San Diego was there, and the assistant Bishop, and the "Three Priests" mentioned in previous posts of this blog were there (although one was participating via prayer telepathy).

The Assistant Bishop (with the fancy title Canon of the Ordinary) got up to give the sermon with Joe saying, "Why is she speaking?" Joe had come to hear The Man preach, not his woman assistant.

"Joe, she's smart enough to run your company, let alone the Episcopal Diocese of San Diego." Joe was one of those blue-blooded Episcopalians who had been born into the church and stayed with it because you're allowed to drink wine and they host great potlucks. Yet, he still hasn't gotten over the fact the church allows women priests.

When it was time for the congregation to pray for their political leaders and the President, as everyone else said "President Obama" Joe said "Palin."

"Joe, why is it that you could vote for Palin to be Vice President and not be in favor of a woman as head of the Church?" He mumbled something about the country heading in the wrong direction. After finishing our prayers, we passed the peace. Joe and I don't always agree, but we're good friends and we agree to disagree.

After the ceremony, I handed the new priest a bottle of wine, saying, "The people are thirsty. Quench their thirst." The Bishop grabbed my arm telling me there was someone he wanted me to meet. He introduced me to the head of ECS. "What do you do?" she asked.

"I'm the self proclaimed winemaker to the Bishop. How may I help you?" She explained how they were planning to host a wine tasting and an auction, and I said count me in. One of the Bishop's non-clerical staff remarked, "We love the wine. Of course we had to taste it to make sure it was good. It was so good someone suggested we should keep it instead of give it to the poor churches." Of course, they decided to do the right thing and distributed it to the churches.

I promised to provide extra bottles this year in addition to the tithe so that each staff member will have their own bottle, to avoid bringing temptation upon the church.
Posted by Craig Justice at 8:34 PM 2 comments:

National Public Radio's Weekend Edition featured a story today about Mexican wine. As a "boutique" winemaker in San Diego, CA we have known about good wines coming out of Mexico for years. Guadeloupe Valley in Baja, Mexico is about one hour south of San Diego. Many San Diego winemakers (including ourselves) purchase grapes grown by Camillo in Baja sent up by refrigerated truck. In fact, our neighborhood Belle Marie Winery features outstanding wines made almost exclusively from Camillo's best Baja grapes. (I remember the first time I visited Belle Marie some ten years ago -- I was sceptical. But after the first sip, I was hooked and have been a big fan ever since.) One issue I have with the NPR story is the taste test -- an ordinary $10 Nebbiolo wine from Baja's Cetto Winery was chosen to compete against a $50 Nebbiolo from Italy and another wine in a blind tasting. This selection put the Mexican wine at a disadvantage -- it would have been like Steven Spurrier offering "Gallo" wine to the French at the 1976 shoot out in France. In 2006 we made a Nebbiolo wine from Camillo's grapes (which Mick from Belle Marie, a real supporter of the local winemakers in Blue-Merle Country, was generous enough to share with us) that is suited for Kings, Queens, company presidents and Popes. I gave a case of it to the Episcopal Diocese of San Diego, which thought so highly of it that they served it to the Presiding Bishop of the Episcopal Church during her visit to San Diego last year. Everyone raves about the wine. And, as all winemakers know, "You can't make good wine from lousy grapes." Thank you Camillo (who I will put up against any grape grower in the world for his contributions to viticulture) and to the Baja Winemakers, I salute you!
Posted by Craig Justice at 2:42 PM No comments:

Outlaw Winemaker Runs Into "The Law" in Texas. Was Justice Served? 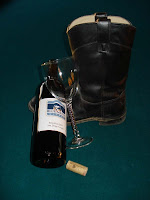