On Making Wine and Turkey 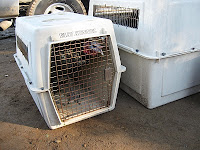 And how is it that making wine and butchering a turkey are similar? They both start with a lot of preparation and finish with a big water hosedown. Both use a big blue container, a destemmer-defeatherer and a punch down tool. But we're getting ahead of ourselves.
It was a noble idea to purchase a fresh, organic, corn-hand-fed, heritage turkey for my father, one of the Fighting Gobblers and a true Hokie (the Virginia Tech mascot is a castrated Tom). He recalled the time when as a newspaper delivery boy in Richmond, VA he won a turkey one Thanksgiving and went on his bike to pick it up and was surprised to see a live bird. (That was back in the day, last Century.) He held the flapping gobbler in one hand and the handlebars with the other and cycled home where Grandpa, the Petersburg Kid, knew what to do with a butcher knife. He says it took forever to pluck the feathers. Guess dad didn't know about dunking the bird into boiling water to loosen the feathers, although he knew about dunking birds to baptize them.

Turns out mom & dad had other plans for Christmas this year and the Queen, who wouldn't hesitate to ea 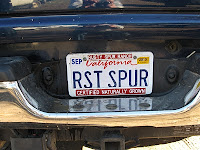 t a steer from Kobe raised on beer dregs and hand massaged, wanted nothing to do with this bird. "Don't kill him," she warned. "We'll make him a pet. Bluey needs a job and can look after him." This is the same woman who in rational moments says she wants no more pets. So I called Jane, the grower, to discuss the options. Well, as a pet, she said, he wouldn't last long, being favored by bobcats and coyotes who live in these parts, and being raised by hand, wouldn't be able to forge for himself.

I put out a notice "Free Turkey" and if there were no takers would bring him to Tiny Tim at the Interfaith Community Services Shelter. The only responses I got were from animal rights activists to free the bird and an old Lynyrd Skynyrd groupie looking for Freebird (that was back in the day, Last Century.)

The location of Rusty Spur Ranch is just a hilltop over from Blue-Merle Country but it's a world away. There, everyone has at least 40 acres to work with and raising livestock is as common as a flower garden in the suburbs. From there, jump just one more hilltop over and the next thing you know you're in Montana.

When Jane went to the pen at o'dark hundred she found ice on the birds' waterhole. Tom, whose ears w 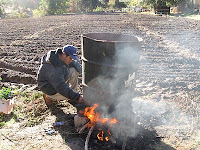 ere pinging, instinctively knew it was time and as she opened the dog crate for the ride to the butcher's the Dodger flew the coop. She called me with the news, "You're bird's escaped, but...."
"That's great! I was going to pay you not to kill him.""I grabbed him by his tail feathers before he could go too far and wrestled him into the cage."
I was disappointed. Tom's escape would have solved my dilemma. "Listen, my wife, the Japanese Buddhist who loves to chomp on Kobe Beef, has found religion and wants nothing to do with this bird."
"Does she eat store bought turkey?""That's not the point. She's not a vegetarian. There's one thing I've learned in life: There are times when you need to listen to your wife. Let me pay you for him to keep him alive. Don't you need to keep one Tom as a stud?"

"I already have a stud. Let me tell you, I raised these birds by hand. I'm their mother hen. I love these animals. They roam freely. This is the best turkey you've ever had. I'll never eat store bought meat again. If you saw their operations you'd be horrified."

"OK, OK, I'll see you there." So I got in the car and drove through winding country roads and open vistas 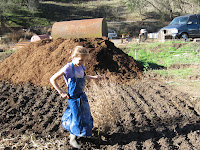 enjoying the sunrise on the shortest day and as I got to the other side began thinking, "I'm not in California any more." Or, perhaps I had gone back in time to the real California, where people grew their own, made their own, ate their own. Jane, with still a bit of city slicker blood in her veins and not being able to stand the sight of too much of it had hired a butcher to do "the deed." We met at Paul's 40-acre property, the sacrificial grounds being in a valley at the bottom of the hill with crisp ice covering water puddles and a plowed field surrounded by hills and acres of oaks, lemons and avocados. "I'm just a dumb farmer," says the owner about growing avocado trees in an area with only 10 inches of annual rainfall.
"I hear you brother, so am I. I grow grapes."
"Where's your place?"
"In Blue-Merle Country."
"That's just the next hill over," he said, and a world away I thought.

The first order of business was to build a fire to heat up a tin drum of water. The birds will be dunked in t 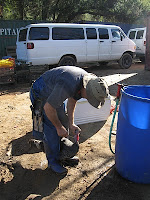 he hot water to soften the skin so that feathers pull out easier than clumps of hair from a balding 40 year old.

Next, Paul brought out a blue, polyurethane plastic drum, just like the ones we use for wine storage and fermentation. I soon found out that's where the birds are dropped after their necks are slit. It keeps them from running around flapping their wings with their heads dangling. Made sense to me and from now on when I hear the tapping sound on a plastic drum I'll think of the bird inside like a fish out of water flapping on a boat deck.

Paul's kids and their cousins were there to help build the fire and work the assembly line and I thought of our Princess back at home asleep missing once again something she would never forget. Does this kid really want to join the Peace Corps and work in Africa?

Once we were set up and the water hot we were ready to begin. Paul took a bird from one of the dog cages, straddled it, slit its neck and dropped it in the blue drum. After a few minutes, he picked up the 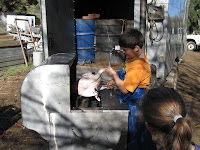 bird and put it into the drum of hot water, taking a punch down tool (today a shovel) keeping the bird under water as if making soup or punching down a cap of rising grapes. After a few minutes, the bird would emerge from its bath and the feathers extract easily. Paul pulled out the large feathers; Jane would take the tail feathers to an archer friend who makes arrows. Next, the defeathering machine. Holding the bird, the machine would strip most of the remaining feathers from the bird; the kids would pull out the rest. At this point, the turkey looked like any fowl you'd purchase at the store except for the feet and dangling head. You could rip the skin off the toes and if there was a black toenail left, that would just either break or pull out (with flashbacks to George Clooney and a torture scene from the movie Syriana).

On the assembly line the kids pulled out the lungs, hearts and kidneys while Paul cut off the feet (a delicacy I learned to enjoy on trips to China and local dim sum restaurants), the neck and extracted the 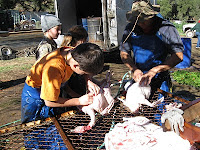 gizzard. The kids had fun hunting for treasure in the gizzard, finding shot gun pellets, wires, but no diamonds. When the birds were cleaned they were thrown into an ice bath to cool, and after we were done washing up Jane and I put the birds into an ice chest and began the climb out of the valley.

After 21 years of marriage I have no reasons left to lie to my wife and when she accused me of killing the turkey I told her honestly, "I did not kill that bird." I did, however, admit to plucking a few of them and making a video of the event for those of you who live in the city or the suburbs and dream of a life among the vines, growing your own, making your own, drinking your own wine, and eating your own turkeys. As she stormed into the garage to fetch the golf club we use as a punch down tool for grapes to punch me down I remembered she also keeps her samurai sword in the same place so Bluey and I headed up the hill to fork loads of compost and to let her settle down, while among the silence of the vines, we heard the wife's song turn into sweet wine.