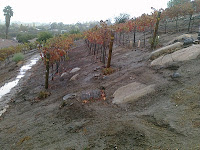 The annual vineyard log coincides with the beginning of the rainy season, after irrigation has been cut in the Fall. Here is a record of the 2010 Vineyard Year from November 1, 2009 to date. (I use this page for internal use: no stories about Joe the Wino, Coyote Karen and Merlot Mike. They will return soon with a vengeance in upcoming posts).

To do reminders: Contact Frank Bons from Sunfresh Vineyards about contracting for a spraying program.

Nov. 23rd. 25 yards compost arrived, dumped, miraculously, through back gate, without damage to driver, gate or me. Supplied by Agriservice. 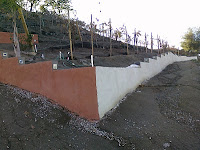 January 11th: Pruned first row of Grenache. No sap in the vines, so pruning should be fine. (Frank Bons seems to have pruned his vineyard the first week in January, which seems early.) Will begin pruning in earnest from January 15th, with goal of finishing by February 15th and then hitting with dormant spray and oil.

January 23rd, pruning in earnest. This time after rain, sap comes out. Finished most pruning end of January. Mistake: should have sprayed right away.

Applied organic JMS stylet oil and dormant spray (lime sulpher) to about 1/2 vineyard Feb. 7 & 8th. There is green "mold" on some of the spurs. Frank not available; did it ourselves to get it done quickly. Finished spraying weekend of Feb. 14th. (except for 3 rows of Zinfandel.) 10 pints of lime sulfur used; 64 oz stylet oil used. Round up used on sprouting foxtails on some outer areas.

Heatwave! February 12 - February 18, with daily high temperatures above 70 degrees, one day in the high 70s. Ground is drying out on the surface (although plenty of moisture down under). First bud burst of a small, thin, Petit Sirah vine, but that's the only one. A few more days like this and we'll be in real bud burst and the rattlers will start rattling.

We didn't count exactly how many pounds of canes were pruned, but here's an estimate. 30 bales of canes @ 20 lbs. each = 600 lbs. Delivered the bales of sticks to the curbside where the "recycle" trucks picked them up.

Feb. 27th -- 1" rain (13.4" year to date) and another gopher (gazebo area) 9 gophers YTD. Started tying vines. This has been the most rain we've had since we planted the vineyard 3 years ago. Hopefully we'll get a couple of more storms, and we'll be able to significantly delay irrigation this year.

March 6th rain .33" (13.73" year to date) -- wet weather continuing over the weekend; sprinkles. Came across first young rattlesnake while thinning out weeds top of the hill. Scooped him into a bucket, then a purple pick bin and released in a nearby canyon. March heat wave. We had a week in March were temperatures hit 80 in the vineyard. Bud break mid-March.

April 1st rain was mist so doesn't count. April 5th rain gave us 1/8th inch (13.85" year to date). Caught two gophers this week, both caught on the first try I might add (11 gophers season to date). All barrels of wine topped and accounted for; the super Italian blend of "Blunello" and Petit Verdot is surprising good. Bluey ate a dead rat up by the avocados. April 10th ... first Petit Sirah shoots hit top wire. There is a group of 3rd leaf vines (our new vines) that are still dormant and we're worried about them... they are a different rootstock so we're wondering if they're just sleeping, or damaged by something we did?

April 12th, 1/2" of rain (14.35" year to date). Caught 2 gophers (13 year to date). Protea flowers (yellow pincushions) in full bloom this week. Paying attention to mildew index (days where temperature is between 70 - 85 F degrees for 6 hours). Frank scheduled to spray vineyard with Rubigan on April 21. "Bottom" of vineyard is very green; however, some Tempranillo vines up the hill seem stressed and I may need to water. A few vines seemed "burned" from application of too much dormant spray. About 5 vines are still "dormant" (are they dead or resting?)

The last April storm brought a little over 1.5" of rain. So, year to date, I'm going to call it 15" of rain (which is about twice as much as last year). As we headed into May, the vines are vigorous, and there's no need to irrigate, except for admire treatment.

We sprayed Rubigan on May 5th (during a time of high mildew pressure) but the weather turned cool and we passed the 3 week mark without needing to spray again. On May 28th (Sat. of Memorial Day Weekend), we start with the mildew index at zero, but it's definitely warmed up today. If it continues, we'll need to spray the first day of June.

There are pesky gophers in the upper Grenache, the lower Tempranillo and by the lower Aglianico. We did catch one at the lower Grenache (#15 of year); a snake "of extreme interest" spotted in squirrel hole of viaduct; it's skin spotted one week later.

Admire treatment (with about 1 hour irrigation) done May 19th to keep sharpshooters away. 1 oz on Zinfandel, Grenache blocks. 2 oz on the rest.

Trying to thin some "laterals" that are coming out.

2nd spraying done June 10th by Staley Grove Management using 2 guys with powered backback sprayers, arriving at 6:30 am and finishing before 10 am. Sprayed Rally. Had been heavy mildew pressure. Frank unable to come the week before, which would have been perfect timing for spraying. Alas, as we were late by 1 week from ideal spray date, Al noticed some mildew in Grenache; that seems to be under control. However, I discovered an "infestation" in the Aglianico vines to the left of and behind the shed at the top of the hill. Since Rally is a "protectorate", with a hand backpack sprayer I sprayed organic JMS Stylet Oil (1% dilution). As I inspected the rest of the Aglianico block, I noticed signs of mildew, so ended up spraying all Aglianico vines with Stylet oil, finished June 17th. No other signs of mildew in other parts of vineyard.

As of June 20th, it still hasn't been necessary to irrigate (except for the admire treatment). There is strong vigor showing in most vines (too strong, in fact), which has lead to continued lateral thinning trying to keep the canopy open. I topped approximately 10 vines that were way overgrown (partly as an experiment to see what will happen). We used 13 units of water in the reading at the beginning of June, finishing the fiscal water year with 100 units as a "carryover allowance", which in reality doesn't carry over. Today, examining the top 3 rows of Tempranillo, those vines beginning to show some signs of stress, so watered those vines for 1 hour (approximately 2 gallons/plant). We caught two gophers this week (YTD total 16, with gopher pressure in the upper Grenache area). Two covies of quail have been making treks onto the property (Western Grenache, adjacent to the wild, wooded area), and the northern front of the property. Have not seen the snake; interestingly, the hole he occupied has been filled in. Very strange. Frank schedule to come on June 24th for a spraying (which will be a 2 week interval). For the days June 14 - June 20th, high mildew pressure (it's at 100).

It must have been one of the coolest June's on record, and July (up to the 10th) is cool as well. Thick, damp fog most mornings. Frank unable to spray July 8 - 9 (2 weeks) so we're scrambling, although it's been cool last 4 days and mildew index is about 60. I'm scrambling. Have been using organic JMS Stylet Oil to do spot spraying where mildew has popped up. In the begging of July, I started "hedging" some overgrown areas, to let more light in (and improve air flow).

On June 27th began irrigating the upper Tempranillo and Zinfandel (some Zin are showing some signs of stress as of July 10th). Those blocks irrigating each week since June 27th.

Irrigated most of the rest of the vineyard July 4th (except for vigorous Tempranillo at bottom of hill, two rows of Grenache). Veraison started on Durif July 4th weekend and "wood" forming on some of the canes of Durif and Zinfandel.

The Aglianico at the top of the hill by the shed are totally infested with mildew, overgrown and I'm ready to give up on them this year (whack them back) and start again next year with improved trellis system (to better manage the canopy). The vines are too close up there and it's an excellent example of how NOT to design a vineyard. (Fortunately, it's just a small block of ours.)

Petit Sirah is showing excellent grape formation. Tempranillo is pretty good mostly (as of July 10th); Zin is pretty good; lots of chicks and hens on about 1/2 of the Grenache (this is not good); Aglianico grape formation is so-so. The Durif grape clusters are small ... will plan on an early spot harvest to catch them.
Posted by Craig Justice at 6:14 PM