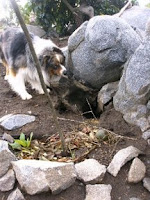 Yet another half-eaten prized "Bacon" avocado lay at the entrance of its home. Adding insult to injury, the squirrel had eaten the avocado we left for him in the trap, leaving behind the nut. He ate it from the outside, without venturing in. This calls for an escalation of techniques: I placed the half-eaten delicacy on the ground, with the trap over it. That way, the rodent will not be able to reach it and pull it to the side; he must go inside to nibble. 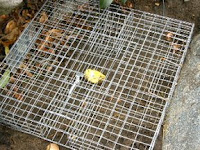 (One week later, Dec. 8th)
The avocado meat at the bottom of the cage is gone. Just the skin remains. We're dealing with one, clever fellow here. We gave a bag of lemons to our neighbor the other week, who returned the lemons as a delicious "lemon jam." I will spread that on some toast and see how that works for bait.

(December 23rd, 2007): Public enemy #1 is still at large, with another victim (a stripped avocado nut) by the hole. A new tactic: this guy is located by avocados, and I have taken an orange from another part of the vineyard. I have dog a hole for the orange two inches deep, and placed it in the ground, peeled, with the trap on top, with the peelings making a path from the squirrels home to the center of the trap. Merry Christmas, Mr. Squirrel!

Will we not catch this squirrel before he eats all the remaining avocados? Will we need to call in a terminator to deploy dynamite and flame-throwers? In a weak moment, will we let the squirrel live free, but by doing so, unleash bubonic plague in San Diego County?
Posted by Craig Justice at 8:53 PM