First Harvest and the Last Racking

We survived the first harvest of 2008, taking in 7,000 pounds of Merlot (without any fingertips) at our neighbor's Escondido Sunrise Vineyard. Don, the veterinarian from Valley Center who is a veteran grower of Petite Sirah, was on standby in case anyone needed a digit sewed back. The only potential problem with having Don instead of a doctor: "They might end up barking after the procedure." It was quite a day, which began with perfectly cool weather for a change and a champagne toast. And once again, Nancy made brisket that couldn't be beat, accompanied by enough wine to fill a swimming pool and the stomachs of more than 50 volunteers.

The day before, Bluey and I took what grapes 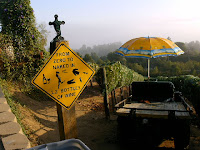 we could glean from the yellow jackets and honey bees -- the premier harvest from Blue-Merle Vineyard. Our goal: 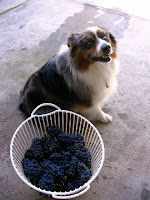 gather enough Tempranillo to make jam. We found that making San Diego's best jam ever is not an easy task -- I just threw the grapes into a pot and started boiling them. At the end, I ended up crushing them by hand, destemming them by hand, and picking the seeds out, by hand. The resulting liquid is nectar from heaven. But after adding some pectin, the liquid didn't set. So 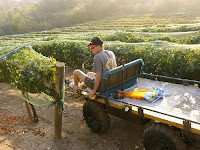 now instead of jelly, I've got pancake syrup or concentrated natural grape juice. (I added some to lemon juice and made a refreshing drink after the harvest.) There are still a few grapes on our 2nd year vines, and we're debating harvesting those for the farmer's market, or perhaps trying to make a blush rose?
Picking grapes is fun. Racking wine is not. It's a chore. But, with some wines, it needs to be done. "Racking" is the process of transferring wine from o 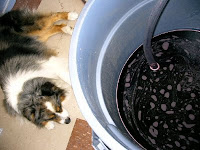 ne container to another, which allows you to remove the lees -- or sediment -- from the container when empty. In addition, it allowed me to add some "oxygen" to some wine I have been storing in beer kegs. It seems ironic that we spend so much time trying to keep O2 out of the wine, and here for a brief moment we're trying to add it. But the fact is, wine stored in a beer keg does not experience that slow oxidation process which wooden barrels impart to wine, and I've found that wine we've made [expertly] and stored in beer kegs is somewhat "harsh" compared to equally made wines that we love which are stored in wooden barrels. A small, electric pump moves 15 gallons of wine from the keg into a clean storage container in a few minutes. That device sure is a lifesaver, b 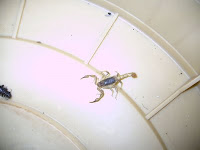 ecause in the early days, we would have used a siphon hose -- and the procedure would have taken longer, if we were able to complete it at all. When I picked up the keg to rinse it out, I wasn't surprised to see a black widow at the bottom. The surprise was that she didn't bite me -- as I had been carelessly carrying the keg with my bare hands. Dodged another bullet. After racking the 2nd keg, I looked carefully at the bottom before putting my hand there. No spider this time. Just a scorpion.
This marks the fifth anniversary of winemaking for the Blue-Merle. My sister in Connecticut has one of the last remaining bottles of the 2004 Syrah, our first effort. I'd pay her $100 for it. It probably tastes pretty good by now -- too bad the Queen consumes all of ours before it ages. For five years, I've been a voice crying in the wilderness taking photos, writing web pages, and blogging about making your own, growing your own, drinking your own wine. And in five years, I think there are about a dozen of you out there, amused by our progress or lack thereof. The other day, I set up a group on LinkedIn called "Kaisha Society" which was an attempt to reconnect with friends who lived and worked in Tokyo 20 years ago. Kaisha Society has gone somewhat viral, attracting a dozen new members today -- whom I've never met before. Perhaps I should become a marketer of a non-profit professional organization for people whose work involves Japan rather than a raconteur of wine?
Then again, maybe I won't. I suppose there's at least one person who's been inspired by this story of a guy and his dog who make wine in their garage: Bill Powell. I met Bill at Grace Church San Marcos two years ago when we came down from the mountain to give worship, praise and thanksgiving for all of the blessings bestowed upon us and this land. He said he was thinking about planting some vines, and we shared with him our plans. We advised him to just do it, which he did, on a little strip of land in his back yard. When I saw Bill at Merlot Mike's on Sunday, he shared his news: He bought 10 acres and a house in Paso Robles, CA (the best wine country in the world) and is planting a vineyard there this winter. Way to go Bill!
Next stop: Malbec this weekend, Petit Sirah soon thereafter, then Petit Verdot. 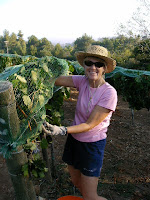 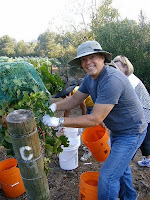 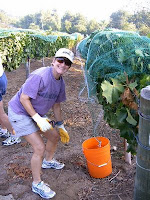 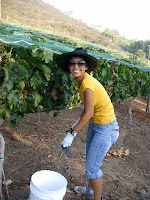 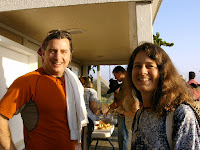 Posted by Craig Justice at 9:01 PM