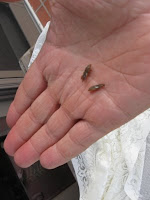 They're out there. Vines that are sending out shoots, sprouting leaves and setting fruit. They are green today but when summer comes and they try to move water from the roots to the leaves they can't. The leaves won't get water. They will turn red and brown and shrivel and the vines will die. There are dying vines in the vineyard and I don't know which ones. They are zombie vines infected with Pierce's Disease, the #1 enemy of vineyards in Southern California where the sharpshooters fly. Those pesky sharpshooters. Glassy winged. They suck the juices from an infected vine, become infected themselves (they are born innocent) then go and bite a healthy vine who becomes a zombie.

When we planted our vineyard two years ago I noticed some interesting bugs on the vines. Move near them and they instinctively scuttle to the other side of the shoot to hide. Clever rascals. Paso Robles Bill, who planted his micro vineyard two months before us that year, called in a panic: "I have sharpshooters in the vineyard!"
"Are those the ugly bugs that hide on the other side of the shoot when you move near and look like frogs with a flat alligator nose?" Yes. I was told to wait until I had significant growth in our vines before applying AdmirePro, a regulated chemical (very similar to nicotine I'm told) that costs about $1,000/quart and repels the sharpshooters. Sharpshooters don't like the taste of vines with admire (which will kill them) and will s 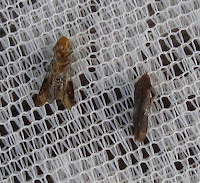 tay away from them. Bill, whose vines were taller with plenty of foliage, inoculated his vines right away. We didn't, not until Labor Day. Last year, when I saw red leaves in the vineyard I panicked and called an entomologist who inspected the vines and told me that the redness was a varietal characteristic of Tempranillo. I had dodged a bullet. We even had a vine tested for Pierce's disease -- and the report came back with good news. However, Paso Robles Bill said that the incubation period can be up to three years, so I may not see any sign of the disease until next year, or the year after. And so they are out there, zombie vines. And, I just found a sharpshooter in the vineyard last week. And, another one today.

Just got back from a meeting with Pat Nolan, San Diego County's plant pathologist, and she gladly answered my long list of questions, including, how long is the incubation period? She assured me that an infected vine would show symptoms the next year. Looks like we dodged a bullet. And, that one vine in the vineyard which isn't putting out shoots? "Rip it out."

If admire is similar to nicotine, I'll ask my princess the college student to do some research: clone the nicotine gene from tobacco into vinus vinifera to produce sharpshooter resistant vines. There is likely to be an additional benefit from the nicotine: drinkers will get hooked on our wine.

Just received a notice from the bank. The line of credit we've had for 10 years will not be renewed and the bank is demanding payment of $50,000. Worse than zombie vines are zombie banks. Time for a fire sale to feed the zombie bank: One thousand bottles of wine for sale at $49/piece .... any takers? Perhaps I can work out a swap with the bank.
Posted by Craig Justice at 9:07 AM

Not so jealous of this post. I want owls, I don't want this nasty little vector of PD. Feel bad for you.
And as an ex-banker...wow, bad day!