Mouvedre and the Stuck Fermentation 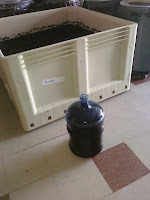 The final puko-puko bubbling of the last fermentations is near and the window of opportunity for dealing with 15-gallons of semi-sweet "stuck" Zinfandel wine is open. Stuck wine is what you get when fermentation stops prematurely and there is residual sugar. It tastes wonderful and I dream of sipping a "Late Harvest Zinfandel" to warm myself on a cool winter night. But bottling a wine with sugar in it is an improvised explosive device. It's just a matter of time before it blows up with unforeseen consequences. Lum told us about his winemaking friend who gave his fiance in New York City a case of wine which she put under the Christmas Tree. The residual sugars in the bottle, disguised as a legion of Trojans inside the horse, blasted through the cork and rampaged through the apartment dying the white carpet burgundy. If she was that upset by this maybe it was a good thing they didn't marry. I had just given Terri a bottle of one week old Tempranillo (still fermenting in the bottle), the first fruits of our first harvest for her to serve her guests at a dinner party, which she forgot to serve and stored in her pantry. After Lum told his story I sent her an e-mail warning, "Terri, you better open that wine outside. It's going to erupt like a shaken can of Coke." She reported that the wine had exploded and redecorated her pantry. Since I'm not engaged to Terri she couldn't break off the marriage but she does have the powers to have me excommunicated from The Church and my only hope is that she knows the word forgiveness. She is the wife of our beloved patron The Bishop. In summary: sugar in table wine is not a good thing and I've got a batch of Zinfandel with 2% sugar. In winemaking terms, we say it's 2 brix.

How is it that a 6th year, semi-experienced winemaker and the author of this authoritative tome on winemaking ended up with his first stuck fermentation? The explanation is simple: I'm married. In late August we were blasted by a heat wave with temperatures over 100 degrees and the sugars shot up in the grapes and we rushed to harvest them as quickly as possible and ended up with Zinfandel at 27.5 brix which after cold soaking for a day in those tasty Zinfandel raisins had risen above 28.5 brix (which has the potential to make a wine about 16% alcohol). That would sure make a Big Red Wine but I also know that as the alcohol increases in a fermentation the yeast don't like that so much and can conk out leaving you with a stuck fermentation and trouble. So I suggested to our Queen that we add a little water to the grape juice to lower the sugar and therefore lower the alcohol so that the wine would be pleasant to drink and wouldn't stick but she protested that she wanted to drink the wine the way it comes out naturally without making any adjustments and so in the middle of the night while Royalty slept I went into the garage and added water to one batch of the grape juice but not to the other and for the record the batch I added water to didn't stick and came out great and the batch without the water (by decree of The Queen) stuck at 5 brix.

As I hadn't yet learned that there are "killer yeasts" that will ferment up to 18% alcohol, I went through the process of hydrating my "regular" yeast and adding some pure grape juice to it to get it going and half a day later added these really happy yeasties to the stuck fermentation and we got it going again and the brix dropped from 5 brix to 2 brix and then stuck again. So what I decided to do (instead of adding Everclear 190 proof alcohol to make a light --less sugar--Port-style wine), was to add the stuck wine to an ongoing, vigorous, fermentation.

(Reflection: If yeast are weakened by alcohol and if spermatozoa are yeast with tails what happens to the manpower of men when they consume alcohol?)

It's near the end of the crush season and we've only got two fermentations left and I made the executive decision this evening to add 5 gallons of the stuck Zinfandel to an active fermentation of Mouvedre (see photo above) and I'm fixing to add the remaining 10 gallons of stuck Zin to a fermentation of Cabernet Franc later this week.

About that Mouvedre... Ten years ago we went to France for my 40th Birthday (this was before The Crash of 2008 when we could borrow from our home equity and vacation in Paris and travel around the world and send our kids to private school and invest in the stock market and Pass Go and do it all again) and stayed in the town of Bandol which is about one hour from Marseilles. The cottage were we sojourned is surrounded by acres and acres of grape vines and each day I got up at sunrise to jog through the vineyards. We drank the local wines everyday and our favorite was Domaine Tempier and we all brought back cases of the wine with us. I realized that the South of France is much like the South of California and we could also grow figs and lavender and oleander (although now I don't like oleander so much because it's so poisonous) and play petanq and realized France is far away and all you ever really need in life you can find in your own backyard and like Dorthy from the Wizard of Oz (one of my favorite movies) I realized there's no place like home and today, even in this economy, we live like we're on vacation in the South of France each weekend even though there's no money because wine is cheap, lavender is cheap, figs are cheap, olives are cheap and friends are priceless.

When I visited Dad last month he gave me a book about Domaine Tempier and Madame Lulu the matriarch and I absorbed the recipes and the winemaking and what struck me most was that their wines are made from 100% Mouvedre grapes and I became determined to source some and Paso Robles Bill was able to provide us with a half ton. These Paso Robles (my favorite wine region in the U.S.) grapes arrived Saturday 10 days ago and we cold soaked them for over 4 days and have been fermenting for almost 7 days and they are tasting wonderful and we have great expectations. And, like Domaine Tempier, I plan to age them 18 months in an oak barrel (I hope they will not mind French oak) and I hope they do not mind that 7% of the wine will be Zin (because we had to do something with that Zin) and if it comes out good we'll call it "Lulu" in honor of Madame and after the Princess graduates from college and after we win the next shoot out winetasting competition we'll go to France and bring some wine to Domain Tempier and we'll exchange winemaking stories and toast to the new century in Franco - Americano cooperation, goodwill and the good, simple life.
Posted by Craig Justice at 4:53 PM

I think you may need Scott Labs ProRestart 43.

Dear Super VinoGirl, where were you on Labor Day Weekend when your services and advice were in need? By adding the Zin to the Mouvedre and the Cab Franc, it fermented dry, and we came out just fine, and perhaps with a "complex" tasting wine. We pressed the Mouvedre last night ... best wine I have ever tasted after pressing, and definitely deserves the name Lulu after our heroine. Tonight we will press the Cab Franc -- last pressing of the season!

Good luck with the CF...one of my fave varietals.

We cold soaked the Cabernet Franc for 8 days before adding yeast, a record for the Blue-Merle. The Queen has already started pressing without me; I'm so proud of her: a 98 lbs. winemaker strong as steel, learning how to do all this winemaking herself. I can taste the soft tannins from the skins -- we will press very, very lightly with this batch, separating the free run from the "pressings." It may need two years bulk aging before bottling (with all those tanins soaked up), but we shall see. Well, it's off to the press and hopefully not another all nighter. Please come back for the next episode: "Sweet Grapes, Salty Grapes, Never Sour Grapes." Cheers!

I too had a French Camp/Paso Zin stuck at 1.9% this year and went through
a. filtering with a small, 3 filter hydraulic pump
b. diotomaceous earth, to improve pump flow
c. dilution with my finished, dry petite sirah, also from Paso
d. consideration of various killers, such as potassium sorbate (but supposedly leaves an aftertaste);and an antimicrobial delivered only with HAACP methods and an endowment;
e. reassurances from other winemakers, suggesting it would not be problematic.
f. other killer yeasts, including 43 mentioned above...though it's possible that the EtOH level exceeds 17, even now...Vinquiry only measured 15.8, but that was after ML and before continued primary (don't ask).

Bottom line: glad you redistributed it. The wine tastes like a dream, but the filtering was not wholely successful, despite our best efforts, and some bottles (but not all) have a spritz to them, even 5 months after bottling. It does blow off after 15 minutes and some swirling, but I'm not sure I would trust it to age.

Dr. John, we added the "stuck" Zin to the Cabernet Franc and Mouvedre fermentations, which fermented to complete dryness. We accomplished 3 things: 1) the Mou and the CF became more "complex" 2) we lowered the pH's of the Mou & CF (which were over 4.0 -- the Zin pH was around 3.3) and 3) we got rid of the stuck zin. Watch out for exploding bottles with your bubbling wine!