Jumping Is For The Dogs 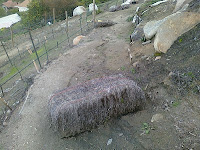 The sun shone early this morning as Bluey and I went for a run through the vines. As I jogged along the rows cut into the mountainside, he zigzagged and slalomed around poles demonstrating the agility of an Olympic skier. The way he lept over irrigation lines and obstacles going downhill impressed me. I came to a bale of hay on the course and had a brilliant idea: make a jump for him, with the image of equestrian competition. I called him over and asked him to pay attention and as I jumped over the bale of hay he trotted around it smiling, acknowledging he had made me follow the command to "jump." Smart dog. I thought I would give it one more try so walked back up the hill above the hay bale. Let me set the picture for you. We are on an 35 degree incline on a curved path above the vineyard with the vines below us on the left. I built up some speed and tookoff into the air as Bluey watched me land on one foot, the first step in an unplanned triple jump with step two taking me over the side of the "cliff" and step three with me flying towards the wires of the trellis system....
(Post script: My fingers are intact and I'm able to type. The careful forensic observer may notice in the photograph my foot prints and bodyprint below the vines. The dog just smiled knowing he had won.)
Posted by Craig Justice at 6:42 AM

Your blue merle would fit in well in Vinoland...the Vinodogs treat me with utter contempt also!!!

Oh, Bluey loves the ladies and would be at your beck and call. Not a bit of contempt, none indeed.