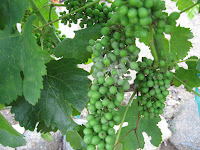 The challenge was how to effectively spray a small vineyard on a steep slope to keep Powdery Mildew at bay. For some locations, there may be ample space during vineyard installation to terrace wide, flat rows between vines so that a tractor or other four wheeled vehicle (such as a Gator) can be loaded with a sprayer and carted between the rows. (Our property is relatively small and so we didn't terrace the land.) A simple backpack sprayer takes approximately two days and is much trouble as the liquid seems to always get clogged, and the spray in uneven. Another possibility was to purchase a motorized backpack sprayer. This would work, providing a good mist on the vines, but is heavy to carry around. Last year, Frank Bons of Sunfresh Vineyards, who operates a vineyard management company in San Diego County, sprayed the vineyard with a long hose (approximately 300 feet) connected to a large tank on his truck, first stationing the truck at the bottom of the vineyard, then driving by paved road to the back of the property. This operation took another person to manage the hose. Not all vines were reached, and a couple of sections needed to be done with a backpack sprayer. Says Frank, when it comes to spraying, "I don't like your vineyard."

As the Blue-Merle is a difficult vineyard to spray, careful attention is paid to monitoring the mildew index using the University of California, Davis system to make sure spraying is done only when absolutely necessary. Secondly, Frank suggested using a spray such as Rubigan which is effective for 14 - 21 days, depending on the weather. Frank came up with an approach that worked. He brought a 30 gallon pump on wheels to the property, hauling it to the top of the hill, connected to his 300 foot hose. (Next time, remember to drive the pump to the back gate, and lower it using 2 X 4's.) From there, he marched up and down the rows, moving the pump down the hill and across the property as required. The actual spraying operation took less than one hour. Strong pressure from the hose meant he only had to spray one side of each row.

We used 2 oz of Gowan Rubigan (Fenarimol). According to the label, the recommended dosage for wine grapes is 2 - 4 ounces per acre. We have approximately 2 acres of vines and thought we would recharge the 30 gallon sprayer once and so mixed 2 oz. of Rubigan into the machine. It ends up that we used slightly less than 30 gallons (there are approximately 1,150 vines on the property). As this was the first spraying of the season and there was no sign of mildew, Frank thinks a light spraying may have been better. Meantime, we'll continue to monitor the temperatures to keep track of the mildew pressure, preparing for another spraying later this month, using a different spray to avoid resistance buildup.

Very interesting on how you spray the vineyard and would like to share how we do it where I work.

In view of the continual rains we had these past months (It rained again today and more showers tomorrow), we had to do extensive spraying by hand. Here is how: we parked a tractor with a 70 gallon spray tank at the end of the vine rows due to some standing water and wet ground, and dragged a 300 foot 3/8" ID hose all the way to the middle of the vineyard and repeated the same operation at the other end. Since the vineyard is trained to the quad. system, we must be absolutely sure we spray thoroughly so the spray reaches the cordon on the other side of the first cordon row. The fellow at the driving the tractor to the next middle is responsible for pulling the hose while I spray (we aternate positions every so many rows)

The spray system works with a Hypro pump operating from the PTO of the tractor and do spray between 200-250 PSI with Kumulus DF at the rate of 6 Lbs. per 70 gallons of water, and use a 5500X-12 Spraying Systems brass spray tip.
When the canopy shoots reach 3 or more feet in length and manual spraying is still needed, we change to a Gunjet with a #4 orifice disc.

Fore emergencies we have an ATV with a 25 gallon tank and a SHURFLO pump rated a 150 PSI which does an excellent job. We do not use the 45 PSI rated SHURFLO pump that came with it, too low pressure. The ATV has no problem going trough wet ground and one man can operated it, but with two persons the spraying goes faster with one driving and the second man spraying, very efficient.

Going up and down a vineyard poses a different problem depending on steepness of the terrain. I have used motorized backpack sprayers for dusting with very high humidity (over 80 percent) for better adhesion of the dust sulfur to the leaves and these motorized dusters can spray two rows on each side for a total of four. Also, I have used liquid backpack sprayers which also do an excellent job, but is very tiring going up hill however, if the spraying needs to be done, so be it, no choice and with bad weather, we normally spray after each rain or shower, we do not take chances with mildew, and standing water is not going to prevent us from spraying.

For the ATV operations and the man behind the machine doing the spraying, we use a 50 foot 3/8" clear braided hose.
The spraying goes by spraying 9 vines (spacing is 5 x 7) behind the ATV and return spraying 9 vines again. When I reach the first sprayed vine, the driver moves another 9 vines forward and I continue 9 vines forward on the return trip, and repeat back 9 vines. We use this procedure efficiently, but we start some times at 3:00 A.M.when windy conditions prevail after 8:00 A.M. in those days When absolutely necessary to use the ATV (Repeat: only in emergencies if the tractor or pump come up with an unexpected problem), We added another stronger battery to the tractor and a powerful rear light that it is a joy doing the spraying.

With the tractor and manual operations, we park the tractor parallel to the row of end posts and use a strong light that reaches the other end of the vineyard, very strong light, very bright and clear. This operation also goes when we have to start early sometimes at 1:30 A.M. We have been using the above operation procedures for the past 8 years with good results.

For surfactants we use Silwet L-77, Natural Wet, and Nu Film P This last one has much better sticking characteristics.
Our vineyard is organic therefore, we do not use Class I Chemicals. Once the spraying is completed, we have a nice hot coffee and donuts at the coffee shop nearby. Thank you

We hired a vineyard contractor to spray with Rally on June 10th, the 2nd spraying of the year. It was done with 2 guys with "powered", motorized back back sprayers. It took them about 3 hours. Spraying was done in the nick of time as they found some signs of mildew. As of June 13th there are no signs of mildew in the vineyard. The cost was $25/hour/each for the workers + $75 fee to cover travel time to from vineyard + management oversight.

Hi Craig and Bluey,
My name is Lee. My wife Helen and I are owners of a vineyard in Littlerock, Ca. We have been following your progress and are interested in bonding our garage into a winery. Our plans to build a 2400sq' steel building on our 5 acres have been put on hold due to spiraling construction costs. Eventually we will build , but in the mean time we'd like to start generating wine income to offset some of the capital expense we've already incurred. I recall that a few months ago you were able to bond your garage and I was wondering if you would be so kind as to give me a little insight as to TTB's consideration of your garage attached to a residence as a bonded winery. We don't plan on having tasting at our residence, we'll save that for the 5 acres, and I don't think ABC or LA County would go for it. At present the bulk of our vineyard is at our house on 1 acre with RA zoning and our garage is attached with approx. 400sq'. We have one door that leads into the garage from the house, a back mandoor to the vineyard and horses, and a sliding insulated garage door on the front.
Thank you and Cheers,
Lee

Lee,
Good to hear from you. Go to the TTB website, here: http://www.ttb.gov/wine/docs_required.shtml There's a list of all the forms you need, along with examples. Follow the examples closely, that's what we did. We found the TTB agent to be very helpful in guiding us through the process once we applied. Include a check for $1,000 to cover the bond (note: they cash that check real fast!). One important consideration: by bonding your "garage" -- you are turning your garage into a winery, which means no more cars. If you don't want to give up your garage, may I suggest a 40' ft. refrigerated container? Coyote Karen got herself one of those and it seems to be working out well. Let me know if you have any questions. Good luck!

2nd spraying done June 10th by Staley Grove Management using 2 men with powered backback sprayers, arriving at 6:30 am and finishing before 10 am. Sprayed Rally. Had been heavy mildew pressure. Frank unable to come the week before, which would have been perfect timing for spraying. Alas, as we were late by 1 week from ideal spray date, Al noticed some mildew in Grenache; that seems to be under control. However, I discovered an "infestation" in the Aglianico vines to the left of and behind the shed at the top of the hill. Since Rally is a "protectorate", with a hand backpack sprayer I sprayed organic JMS Stylet Oil (1% dilution). As I inspected the rest of the Aglianico block, I noticed signs of mildew, so ended up spraying all Aglianico vines with Stylet oil, finished June 17th. No other signs of mildew in other parts of vineyard. (Perhaps Aglianico susceptible to mildew? Spacing is also closer that part of the vineyard.)