What Are You Eating? 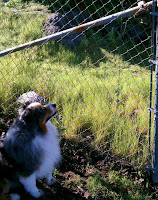 I know Facebook and Twitter are not about what you're eating right now, but do you remember that gopher carcass the Queen asked me to clean up after one of my trips a few weeks ago? I took a shortcut (as I often do being in favor of finding the most expedient, most efficient and most organic way to handle matters in the vineyard) and promptly buried it in his hole, where he rested peacefully, keeping the other critters away with his stench and providing natural fertilization to the soil until 2" of pouring rain and sleet and hail flushed him out this morning. Ole Bluey just found the emerged zombie and despite my protests as I spied the stumpy tail sticking out of his mouth scarfed him in one bite and just licked his satisfied lips ignoring my admonishments. Would you let Ole Gopher Breath share your bed this evening? (If you believe in the law of Australian Shepherds then there will be no denying him so I might as well just give up trying to keep him off.)

This March rain is the icing on the cake of 4.5" of rain in February -- a dry and very beautiful and very warm January -- which followed 10" of rain in December and a wet October and November. In all, we're thinking that we will not need to irrigate until (or unless as the case may be) the vines show signs of stress in mid-summer.
The vines were pruned in February, mostly, and hand-painted with a "dormant spray". If you were cooking popcorn and you're beyond the first pops when it starts sounding like a machine gun, that's where we are with budbreak right now, with baby shoots emerging all over the place, except in the Zinfandel block. Although the fragile shoots are ever so easy to break off by hand (which I have done accidentally on many occasions in previous years) I'm pleased to learn that they have held up well in the harsh pelting rain. There could be even more rain at the end of this week, which will be toasted merange on top of this cake's icing. It's back to the vineyard while still light (thank you daylight savings time) to dig those holes and form those berms and shape those mounds in a foolish attempt to control water flowing down a hillside. Fool on the hill....
Posted by Craig Justice at 6:16 PM

Another wondeful, rainy week. 1/3" mid-week and another sprinkling of 1/8" on Thurs-Friday. Another storm seems to be brewing. It looks as if we'll head into April with wet soil.