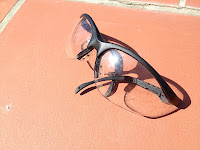 "Ask Fidel what he did with my loppers," she said. "He stole them from the shed."
"Yes dear."
"Ask him what he was doing in my shed."
"Yes dear."
"Take the fruit picker away from the orange tree or he'll steal all the oranges."
"Yes dear."
"Did I tell you, he's taking one ounce of pesticide from everyone in the neighborhood and using it to spray vineyards in other parts of town and charging them for the chemical."
"Really?"
"He's a thief."
"Really?"
"He took my eye goggles. Ask for them back."
"Yes dear."
"And don't let Bluey outside when he's here."
"Yes dear."  There's no use arguing with her. "Should I ask him to catch the gopher in the Tempranillo block?"
"No. He'll just pull a gopher out of his truck that he caught at Merlot Mike's and tell you it's your gopher and charge you $10 for it."
"He'll be arriving soon. Why don't you go shopping at Costco?"
"That's a good idea. If I see him, I'll get angry. Just thinking about him makes my blood pressure boil," said the woman who was hospitalized earlier this year for hypertension.
She leaves. He arrives in Mike's Gator, gets out and waddles over.
"Hey amigo, buenos dias."
"Buenos dias my ass Señor."
Craig, how's the little vineyardista?" he asks.
"Pretty good. How's your blood pressure?" He was hospitalized a month ago with high blood pressure. You'd think they would become blood pressure buddies.
"Not too bad," he said. "Craig, may I take some oranges for my wife? She loves your oranges."
Every time he says my name, I cringe. "Yes," I say.  I note he's asking permission.  "Please don't take them all."
"OK. Have you seen Pedro recently?"
"I saw him last year at the Seven Eleven. How's he doing?"
"Not too good."
"What happened."
"He went to Mexico."
"Why did he go there?"
"I don't know."
"How's he going to get back in?"
"He paid some Coyote $5,000. He's back already."
"I'm surprised he would leave."
"His mother is there, or something. He's limping and has pins in his leg."
"What happened?"
"The police stopped him when he was driving. He didn't have no papers no license no anything."
"And?"
"The cop called the Border Patrol and Pedro started running."
"He ran away from the cops?"
"They chased him all over. Through peoples' backyards. Everywhere."
"Geeee."
"When they caught up with him he jumped off a wall and broke his leg."
"Really?"
"They took him to the emergency room. Put pins in it."
"Did they deport him?"
"No, they were nice to him. They weren't supposed to chase him."
"Geee."
"He's not so young anymore. With an injury like that he won't be the same."
He went back to work and I finished up some weeding and shoot thinning and when it was time to go he pulled the Gator up to the entrance of the property. I saw a 5-gallon bucket three-quarters full of oranges.
"Did you pick some oranges?"
"Si, my esposa likes your oranges."
"So does my daughter and my colleagues at the office. You can't find oranges like that in the store. Let me have one," and I take one from the bucket and start peeling it. No avocados in the bucket today. No apples. "How's your wife?"
"She's no good. Always complaining."
"Isn't that normal?" I ask. "Isn't that what wives do? Do you have the eye goggles?"
"Si, here they are." He hands them over.
"I'll put them in the shed so you can use them next time. What about the vineyardista's loppers?"
"I don't have them. Where's your son?" he asks changing the subject. He always calls Bluey (the Australian Shepherd canine) "my son."
"He's in the house." Fidel puts his fingers to his mouth and lets out a whistle that sets the dog off barking.
"There he is," Fidel says. He waddles back towards the gator and clips the dead branch of a tree with his clippers and with oranges aboveboard and who knows what under the canvas cover drives off.
Posted by Craig Justice at 3:37 PM