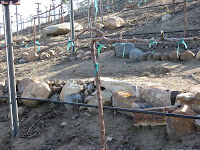 There have been a few distractions these winter months highlighted by the Winos’ Inaugural Ball, the Gopher Wars, running into the Law in Texas and numerous wine tastings for vineyardistas. Concurrently, silently, the vines have been storing water and nutrients and pushing this life force fluid up their trunks and out their cordon arms bursting buds and sending forth new shoots. Spring is here and it’s back to the vineyard.

We started pruning on the last Saturday in January and finished on Saturday February 14th, Valentine’s Day, and I gave the Queen who runs this place and who did her fair share of the pruning (which required my fair share of redoing) a bouquet of “cuttings” – grape stick canes which placed into the ground will sprout new vines if given a little water. And a little water we had. As we pruned, winter returned and we were hailed on, sleeted on, rained on and I had not been this wet since I was a student at the University of Washington in Seattle and biked to school. The wines were quite happy and you could see them swell before your eyes and when you cut with the shears tears flowed through the xylem dripping on the vine, the ground and coagulating around the wound. The ground was wet and we dug holes and placed Nova Vines dormant, bench grafted Tempranillo on 101-14 root stock into the wet clay, planting each one carefully as a rose, first building a mound under the roots, then spreading the roots. I miscalculated the number of vines needed and we thrust a few of the hard cuttings straight into mother earth. (It will be interesting to see which grows better – the cuttings or the grafted vines on rootstock. Phylloxera is not a problem here so cuttings may have their advantage, unless you’re trying to inhibit vigor of a vigorous vine. However, vineyard consultant Frank Bons has observed som 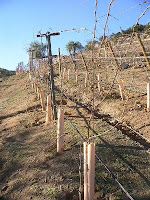 e vines on their natural root stock cannot handle stress as well as grafted vines.) I made a couple of clay mud pies– which I hadn’t done since I was a kid in North Carolina—and sculpted smooth, red berms around the rims of the holes.

We in Southern California have finished our pruning while you in the wintry north may still face the task. We made many mistakes our first year pruning, which we avoided this year. Fortunately, vines are almost as forgiving as a Saint and survived our mistakes.

Pruning is one of the most important activities in the vineyard … you are making decisions which will impact your yield and also maintenance. How many buds to leave? How much space to leave between spurs? Do I need to replace this cordon? Which canes to keep? And, in the case of new vines (which we have at the Blue-Merle Vineyard) you are making decisions about the shape and structure of the vine. As one of the missions of Winemaker’s Journal is to openly share my mistakes so you may avoid them, the rest of this is intended for the would-be grape grower. (Besides, Joe the Wino is on vacation in Cabo San Lucas so there's nothing interesting to write about him this week. Next week, Joe and the Cast will be back for the premier of Survivor: Vineyard Edition.)


The most important thing to remember about pruning vines is that next year’s grapes come from last year’s new shoots. 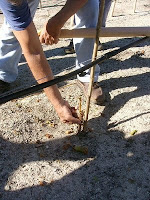 There are three common scenarios you will face when pruning vines during the winter after the first year when developing a cordon system:

1) Cutting the vine back to two buds (from the bottom). In effect, starting over. Doing this ensures a very strong trunk the next year, and therefore, a healthy vine.

2) Bending the vine over, if you have a single-arm cordon system, and cutting the arm at the beginning of the next vine. (We have several hundred vines on 3-ft. spacing with single arm cordons). This should only be done when: 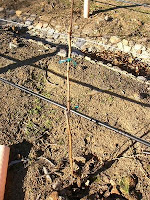 m is at least as thick as a pencil
The bending of the vine can take place at the end of the growing season, if the vine has reached beyond the top of the trellis system and can be bent over without breaking. (Note, new shoots can be fragile, which you’ll find out very quickly after you’ve broken a few!)

3) Topping the vine just below the cordon wire to encourage growth of two arms (or one arm if you have a “one arm” cordon system). Be sure and top "below" the wire, which makes it easier to train the shoots which will become the cordon.

An unlikely scenario is that you have a vigorous vine which has grown so much, and by chance, there are two strong shoots going in opposite direction to make a cordon. (This occurred about 7% of the time with our vines which had vigorous root stocks.) So, we kept what nature had given us. (Check in next year to see what happened.)

e case of “head pruning”, what you do the first year depends on your objectives. You may cut back to two buds if growth has not been vigorous. If you’ve had good growth, you may decide to cut back to the level of the base height you desire for the vine. For example, 2 ft. or 3ft. off of the ground, depending on your objectives.

Common Mistakes for the Novice:

* Not cutting back to two buds when there has not been enough growth.

* Not topping the vine at the top, in a feeble attempt to make a cordon when there has not been enough growth.

* Pruning the vine “above” the cordon wire instead of below. (It’s easier to form a cordon when the shoots are coming up from below. We broke many shoots a year ago when trying to form a cordon because we pruned above the wire. Ouch!)

*Bending over the vines during the summer of the first year in a bi-lateral cordon system, resulting in strong growth on one cordon arm and a very weak other arm. (You will end up cutting off the weak arm anyhow, so save yourself the trouble by topping the vine when pruning the first year.)

When pruning the end of a vine, cut it through the node (to prevent growth).

When bending a cane (a cane is a one year old shoot which doesn’t have “wood” on it), take both hands and place them by the point of the bend to gently “crack” the cane between the nodes. This will avoid breaking the cane when bending it.

If you need to propagate a new vine, you can bend a shoot over into the ground to start a new vine (as opposed to planting a baby vine in case a new one is unavailable).

Seeding a “cover crop” between rows is recommended.

If starting the year from two buds, refer to end of first year above.

If starting the year with a single trunk at the top of the wire then you may be:

Selecting the best cordon, from two or more possibilities.

Where there has not been enough growth for a spur, pruning back to single buds along the cordon wire.

Where you have “wood” from first year growth:

Leaving “spurs” at the desired distance

In the case of head pruning, this would be similar to pruning a rose bush – but leaving buds so grapes may be harvested in year three. 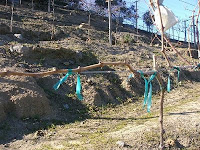 the fruiting wire to bear fruit.

At the Blue-Merle Vineyard there were approximately 900 2nd year vines and 250 first year vines to prune. When pruning, we sterilized our pruning shears after each vine in a mixture of Clorox and water.

To save time, we left the cuttings in the trellis system, allowing us to move more quickly between vines. Because of the warm winter we had, there was much fluid in the vines, which “bled” after we cut them, in some cases quite a lot. The canes that we left to “hang” dripped sap on the cordon arms below.

Because important pruning decisions are made with young vines, our goal is to “think twice and cut once.”

It is clear that our Aglianico vines – on a more moderate root stock – are not ready for fruit this, our 3rd year ("third leaf") – although we expect a crop from the Tempranillo, Grenache and Petit Sirah.

On Saturday, February 21st, we sprayed the mildew prone vines with a mixture of dormant spray (main ingredient a pungent sulphur) and oil. We purchased this from Grangetto’s, and in small quantity, a permit is not required. The mixture is 4 oz of dormant spray and 1 oz of oil per gallon of water. With a 4-gallon back pack sprayer, that meant 16 oz of dormant spray (or ½ of the bottle) and 4 oz of “oil.” This must be applied when the vines are dormant, without green leaves. I was able to cover the whole vineyard with two rounds. The spray is highly caustic and extreme care must be taken to avoid contact with eyes and breathing. The technique is to “soak” the vines, and I found the mixture dripping off the cordon. The cost of 32 ounces of dormant spray and oil is about $12 each. To purchase in larger quantities (and at a lower price) requires a license.

Our neighbor Coyote Karen and ourselves have not been attacked (yet) by powdery mildew, and so we are not on rigorous spraying programs, yet. (We have good airflow and wide spacings between rows -- well most rows except for two or three.) Merlot Mike, on the other hand, is on a rigorous spraying program and is able to keep the fungus at bay. At Mike’s vineyard the vines are packed together, creating conditions ripe for mildew. But at the Blue-Merle, rows are widely spaced, and we have strong “drying” breezes coming off the Pacific. We are also thinning shoots to maintain adequate space (about 7 inches or the width of your hand when you make the "Hook 'em Horn" sign of the Texas Longhorns), so stay tuned to see how long we can go without spraying and if the shoot thinning creates a vigor problem. If it's not one thing with a vineyard, there's always another.

Posted by Craig Justice at 6:54 AM