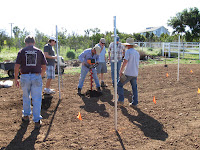 We filmed the second episode of Survivor: Wino's Vineyard Edition at Phantom Vineyard in Fallbrook on Saturday and I was able to win immunity from being voted off the vineyard by staying late to string the last irrigation wires and clean up. (As one of the real winemakers of the group it was my duty to stay until the work's done. That's just the code of honor among winemakers around here.) Of course that also earned me generous samples of Jeff's wine as we sipped his first Petit Sirah made from 3-year old vines and it tasted great for such young vines. And then for fun he opened up a bottle of Aglianico from Trader Joe's. Both Jeff and I are planting Aglianico vines this Spring (we already have about 180 in the ground) and Trader Joe's $6 bottle wasn't bad but by the grace of God we hope ours will be five times better and worth $30 so I can pay off the line of credit which the bank said is now due next week.

e Crazy Lady's property where the gophers had infiltrated in a coordinated counter offensive trying to outflank our defenses and there he was, the infiltrator, ally of the Crazy Lady, dead in his tracks.
This is the first time you've read about the Crazy Lady in this narrative and when you live in the country every community has one. She's the person who drinks more than you and staggers up to your house yelling she's against a winery in the neighborhood because it will attract too many drunks. There's an old proverb about letting dogs and crazy ladies lie and I believe it which has limited our ability to launch a preemptive strike against the gophers and the squirrels on her side of the demilitarized zone, providing them a safe haven to wax strong and borrow their Ho Chi Min trails and supply lines onto our property and invade, when we may need her approval for our winery permits in the future.
Bluey and I started the climb to the Top of the Hill to inspect what was going on back up there. Since Spring had begun and the weather was warmer and we were almost ambushed by a an unhibernating snake the week before I've been extra vigilant when walking the paths and always carry a shovel, my weapon of choice. A vineyardner in these parts without a shovel is like a marine without his rifle and I remembered my lesson from last Fall when I was unarmed and helpless as the serpent in this Garden of Eden slithered by my feet.
As I walked the path lightning struck again at the same place (it's not supposed to do that!) and my jaw dropped in disbelief as another snake appeared at the same location as the week before. Fortunately, Bluey had taken the high road through the fruit orchard or would have walked right upon his mortal enemy as I almost did (especially after a few glasses of wine). After positive identification of the viper's pointed head I dispatched the Diamondback, and hurried to cover up the evidence as the Queen ascended the mountain. Is it cheating on your wife to hide from her the fact you just killed a snake? Or, in her case is ignorance bliss? One rattlesnake on a path is a coincidence but two in one week is a conspiracy and it's clear that the gophers and the snakes have entered an unholy alliance against us.

I checked in with Ms. Connie (our ally in Texas) to see if she was alright because the enemy has proven it's ability to mount coordinated attacks on our various operations. As we have neighbors close by we rely on the shovel, to avoid the risk of stray bullets wounding innocent bystanders whereas Ms. Connie's security is provided by Smith and Wesson. It's not 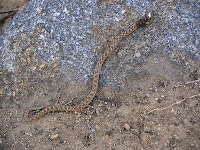 for nothing they used to call her "Hot Pistol Pants."
"Connie, we're under attack. Are you alright?" She sounded a bit shaken with a tint of slurred speech. "What happened?"

"I couldn't get a good shot at the coral snake on my driveway so I resorted to the old fashioned hoe for the slaughter. Then I went inside, popped open a cold beer, and patted myself on the back," she said. That was a relief and I thought of giving her a pat on the back the next time we met then thought maybe that's not a good idea cause she might shoot me. She continued, "I went back outside with a camera to take a picture for Winemaker's Journal - and there was a second coral snake, hosting a wake for her partner. It too fell under the swift and deadly hoe attack."
"Sounds like you need another beer."

"A bottle of your wine would be better. When's the next shipment?"
"The Bishop is coming on Sunday and I need to pack up three cases for the Diocese. I'll get you some more after I take care of him."

"Well, hurry up, will you. Besides, you've got quite a following down here asking for more. I tell you, getting close enough to a snake to use a hoe is not what I call fun, and I wouldn't put up for it except I like your wine. They used to call me 'Hot Pistol Pants'. I now have bird shot for my Smith and Wesson. I do hope the snakes around have heard of my reputation and the new box of 22 long rifle bird shot, and they go find another yard to lounge in this year. "
"Connie, you'll be fine. Thanks for defending the Blue-Merle. Remember the Alamo and don't forget what the gophers did to our last, remaining 25-year old kiwi plant. Somebody has to pay."

"Well you be on the lookout for slithering companions," she said, then warned: "I have heard hunters say that snakes can 'smell' or perhaps 'sense' where another snake was killed and will go to that spot. Not sure if that has merit - but I have seen hunters kill a snake and toss it far away. What did you do with yours?"
"Now you tell me. I just threw it over the fence. I guess its relatives will be back soon, right?" I thought for a moment and announced: "I've got an idea...."

Posted by Craig Justice at 9:30 PM

Craig, sorry I have been a stranger, life is just so crazy...and your posts are soooo long :)
The red in the Orange muscat is normal, infact, out of the 4 varietals I have here, only the Pinot grigio lacks some sort of pinkness.
Keep up the good writing.

Love this post...now that I finally read the whole thing, very enjoyable.
So I guess Crazy Lady should be expecting some visitors soon? Love it!
Sorry about the Sharp Shooter!!!

Sounds like a lot of hard work. I wouldn't mind visiting the Californian Wine regions if only we were rich retirees.

Eeek, sounds like you've been having your own snake problems. Good thing you never forget Bluey -- or that shovel!