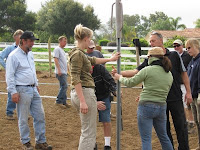 There is a code of honor among wineries to assist your neighbors with their crush if you’re finished and they’re not. You’d think there would be competition but the best winemaking regions are those where there is cooperation. So when your neighbor puts out the call for help to install her vineyard, you go. That’s just what you do. (And that’s just the way we’d like to keep it in Blue-Merle Country, thank you.) 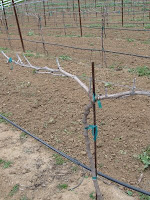 all and we went, joined by the Vineyard Management Class taught by Peter Anderson and Jim Hart who teach vineyard management and winemaking at Mira Costa Community College. This was a so-called “lab” for the “college students” but by the end of it when Jeff generously brought out his 2005, 2006, 2007 Brunellos for a little side-by-side tasting it was beginning to feel like Spring Break and "Survivor: Vineyard Edition for Winos" and I wasn’t feeling much like writing a lab report. Pete probably knows more about viticulture than anyone else in San Diego and Jim is a member of the Hart Family which owns Hart Family Winery in Temecula. Jim is also the Cellar Master for the up and coming Milagro Farm Vineyards & Winery in Ramona, a 100-acre estate worth the trip.

This is what I remember from the “Spring Break” excursion as my notebook only contains 20 words. (I did take 20 pictures, but the video is still in editing as we negotiate the broadcast rights and royalti 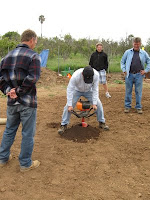 es with CBS for our inaugural season).

There’s more than one way to plant a vineyard. When you ask Pete about what’s the best way to do this? and what’s the best way to do that? his answer is predictably, “It depends.” (We kid him about that answer.) Jeff planted the first part of his vineyard 3 years ago and he’s on 4th leaf and he’s got his first estate wine stored in a breathable “flex tank” in his winery. He’s used rebar metal poles to stake the vines. (I’ve seen that at some other vineyards. Rebar is strong and works well.) He’s used different kinds of end posts. Some are metal. Some are thick wood (with wire hole bored through the wood). He’s decided to install his posts straight (I suspect he may need anchors in the future.) We will be adding another 8 rows on 1/8th acre. He’s decided on 8 ft. row spacing on two rows and 6ft. row spacing on the remainder. (If I were planting a home vineyard I would make my row spacing wider than 6ft.) We take turns using a handheld, gas-powered auger to drill straight down 2ft. (If it were my place, I would have drilled in at an angle and tried to go 3 ft., manually digging out the last foot.) 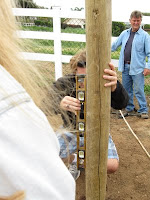 were set by adding gravel and water and tamping dirt back in. No concrete was used. This saved money and Jeff said the clay will set hard. (I have seen several poles at Coyote Karen’s put in straight bend already after three years. At the Blue-Merle we used two bags of concrete per post.) After setting the posts, the team measured out the location for metal guide posts. These were forced into the ground with a “post pounder” by the tall team members. The metal stakes Jeff used were narrow enough so the post pounder fit. (Ours stakes were wider and we couldn’t use the post pounder. When we started to drive our metal stakes into the ground with a sledge hammer, the tops bent. So, we spent much [wasted?] time digging holes for the metal posts at our place.) This was “Habitat for Humanity for Winos” and “Survivor for Winos” rolled into one morning session. Instant vineyard.

We had made mu 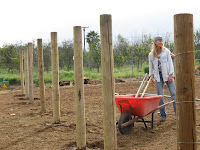 ch progress and next the team took on irrigation. We dug by shovel a trench 18” deep for the schedule 40 PVC pipe. The pipe cutter didn’t function properly, so one member of the team had an ingenious suggestion: he took a piece of nylon; tied it to two small pieces of pipe which he took in his hand; placed the nylon under the pipe and started pulling, slowly at first, and then once it caught, more rapidly, back and forth as if he were building a fire from sticks. He cut right through the pipe with an elegant Hawaiian cross-over maneuver at the end and I knew I was going to vote to keep him on the vineyard. The rest of us wanted to give that a try so we took turns cutting the pipe and gluing in the T’s and then plugging manifold hose into the T’s which wou 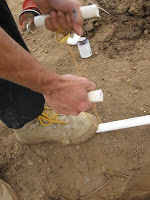 ld then be connected to drip line. (I liked the way Jeff used the manifold hose – we spent much [wasted?] time fashioning pressure regulators and cut off valves on each row – the advantage: even pressure at each row and ability to cut off water at each row.)

Just before noon, our work finished for the day, Jeff took us on a tour of his winery and I was impressed and inspired 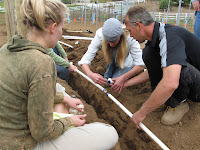 . He had set up a place beneath his house that was wonderful. He had installed a cooling unit (it gets hot in Fallbrook, CA in the summer!) and wine racks to store bottles. He grabbed one of the eight remaining bottles of the first wine he had ever made and we went upstairs for a taste. Everyone had worked hard and earned immunity and deserved a sip of Jeff’s labor. With Jeff sharing his wine so generously he earned my vote to keep him on the show for another week. The survivors will gather agai 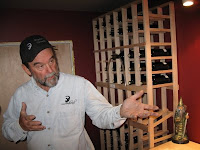 n at Jeff’s place this Saturday to plant the vines and finish the job and hold their tribal council. Tune in next week to see what happens and to take the Wino's Survivor Quiz to see if you've got what it takes to appear in a future episode.

Posted by Craig Justice at 5:42 PM

It looks for sure that there are enough supervisors on site!
(also lots of hotty blonds)

A lot of cooks in the kitchen, some leaning poles and vines slightly off the straightest path. Still, great fun, and the vineyard looks great. We finished the job (mostly) on Saturday, at a total cost of $1,200 for 100 vines. BTW, the correct term for the female survivoralists is "vineyardistas"

it's look like you have done a great job with the irrigation system installing. i will happy to hear it succes :)

Hi.. I too have passion for preparing vine.. But we use different technique.. Anyways thanks for the information..

Hi.. I too have passion for preparing vine.. But we use different technique.. Now got to know something new.. Thank you..