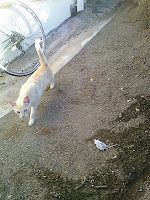 When our neighbors told us they were going away on vacation and asked us to take care of their cat how could we refuse? Especially after they told us he catches gophers. And, because he was going to be outside, there would be no litter box to clean. Carlyle is the skinniest, most undistinguished, runt of a cat you've ever seen. But the fact that he was going to spend nights outside in Coyote Country was impressive. The neighbors two week vacation was going to be his test of cathood, his first allnighters in the wild and no sooner did the neighbors leave that the coyotes, who had been on their own hiatus, came howling back to town in the valley below.

Our Japanese vineyard manager can't pronounce l's and the closest sound she can mimic is "r" so she calls him Carrow. "Isn't his name Karl Rove?" She's always watching Fox News when not vineyarding.

The vineyard needed spraying and as I walked down the rows of vines in my space suit Carlyle trotted faithfully behind while vineyard dog stayed in the shade under a tree, supervising. My new best friend in the vineyard. Then, Carlyle brought me a present (a mouse trying to get in the house, pictured above). Then I found the remains of an avocado-eating chipmunk. Yes, old Carlyle is a good cat. Bluey is still trying to figure out exactly who this "Carrow" is. The last time he tried to sniff his butt he almost got his eyes scratched out. Undeterred, Bluey chased Carlyle up a pepper tree, where he sat on a limb and smiled like the Cheshire cat. The neighbors came back and Carlyle had survived the coyotes and the Blue-Merle and we liked having him around so each day you can hear calls of "Karrrrooooow0, Karrrrooooooowwwo" and "here kitty, kitty, kitty" in the vineyard, and the prancing feline will make an appearance. Of course those catcalls are also triggers for the Blue-Merle, setting him off in a frantic search. It's good to have a new weapon to deploy against the chipmunks, who are boldly racing into the vineyard in search of purple grapes. Vineyard cat.
Posted by Craig Justice at 8:34 PM

I think our neighbours cats do a decent job of catching gophers and using the vineyard as a giant litter box!
Have a great weekend.