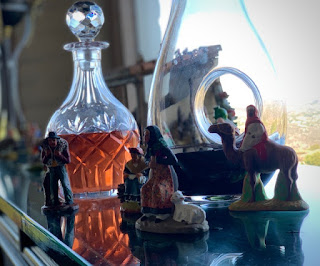 To the Scent Sommelier and Faithful who walk the Way of the Vine,

And to all those who would learn more,

Greetings from the vineyard!

It’s time to prepare, to cut into the side of the mountain to make the paths straight!

Don vestments of purple and violet in preparation for the season. Paint your nails and toes shades of dark grapes.

For the next six weeks, open one celebratory bottle per week, remember and honor:

Week One: Prophets live among us as our venerable elderly, the Greatest Generation, and their offspring, the Lucky Few. Let us toast them with a well-aged wine, our 2009 Merleatage. It’s like sinking into an old leather couch, absorbing aromas of tobacco our elders smoked and many wisely gave up, as they impart their wisdom to us. Prepare yourself for the season. Honor the prophets. Be still - listen for the voice crying in the wilderness.

Week Two: Shepherds are the front-line employees in service industries who keep us fed and going. They tend our flocks. They harvest fruits and vegetables in the field. Pick grapes from the vines. They work in slaughterhouses, preparing meat, defeathering and dismembering chickens. They pick the white flesh from crabs; descale and debone fish at the market; labor at grocery stores. They drive the buses and the trains and attend us on planes. The salt of the earth. They were chosen to hear the good news first announced by angels and faithfully proceeded to bear witness. To remember them, sip the 2017 Aglianico wine, which is endowed with the strongest structure of any of our wines, the highest acids, the sturdiest backbone, the ripest, darkest of grapes. And as the Aglianico will age beyond our earthly lives, so too will modern-day shepherds inherit the earth.

Week Three: Angels are the nurses and doctors who care for us, instruments of the Lord’s healing power on earth. An angel’s kiss on the forehead is a blessing, as light and joyous as a sip of 2017 Tempranillo – the elixir of angels in heaven and caregivers on earth.

Week Four: May our souls magnify the lord. Mary the Magnificent, the Magnificat. The handmaiden, who with Joseph her betrothed, both, full of faith, accepted their callings, accepted their duties. To honor their faithfulness is Petite Sirah, the color of the Bishop’s ceremonial advent vestments, the wine that magnifies the grape.

Christmas Eve:  As the word becomes flesh and dwells among us, celebrate the birth with blood extracted from a stone, grape juice extracted from sun-stressed raisins clinging to vines gripping a craggy slope. King of kings. Queen of Queens. Wine of wines. Port of ports. This is the treat Santa Clause, and you, will appreciate after climbing down the chimney. The late harvest, fortified, 2016 Zinfandel port, an oasis in a bottle vinted in the time of drought.

Week Five: New Year's – a new beginning. When everything is clear – you can see the future. The purity of a rose, flower of the virgin’s rosary. It’s fresh, it’s clear, it’s pure - it will make you blush. A wine to begin a meal, a wine to start the year, a timely Tempranillo rosé.

Week Six: They carried gifts of gold, frankincense, and mir – three wise men from the east, bearing gifts for the Messiah, arriving on the Twelfth Night, King’s Day, the epiphany. The most treasured gift may have been a fragrance, frankincense. Today’s bearers of wisdom are the wise women who bear us, nurture us, labor for us, and who lead us. Honor these women with the most fragrant wine we know, the 2008 Petit Verdot. May its magic continue to inspire and strengthen you this day, throughout the year, and beyond the time when we meet again.

Posted by Craig Justice at 7:03 AM