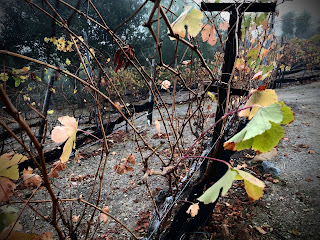 As leaves fall from vines, canes protrude as skeleton bones. At year’s end, only a few leaves cling, except for two green rows at the block above the leach field, fueled by organic matter powering perpetual growth that faithfully produce a second crop picked December 31st, a dozen grapes eaten during the twelve strokes of midnight to usher in luck for the new year.
“It’s OK to let go,” Paul told the last leaves gripping vines for their lives. “Your work is finished. Have faith spring will come again as surely as a rainbow after a storm.”
With last rites read, the leaves took a deep breath, exhaled, and when the next circling air current arose, released their grip and were borne skywards by a wind funnel, and the vines closed their eyes and fell asleep, their songs silent for a long winter siesta, the vineyard, a cemetery of stick figures, crosses, and memories.
Posted by Craig Justice at 4:16 PM