Another Snail Story for 2020 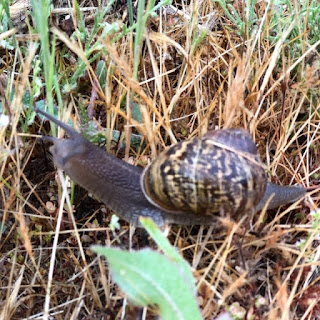 Who knew pet snails would become a thing during the pandemic? Here's what happened when one winemaker found a snail gorging on a young grapevine's fresh green shoots, excerpted from About That Wine I Gave You.

Spring rains paved the way for slugs to glide along paths and some ventured up the trunks of vines to forge on fresh greenery. When Paul found a snail in a spot where there should have been baby grapes, he plucked it from the leaves and crushed it with his foot. Snails were everywhere, in birds of paradise, roses, and shoots, and when he found one, he either crushed it, threw it onto the road with a splat, or sprinkled salt and watched it squirm, writhe, and melt. Paul noticed Bluey the dog chew one of the salted snails and lick his lips.

Bluey and Paul were hungry so he lit a fire to cook a leg of lamb and after the meat met the flame, Paul remembered when Marie-France took him to an escargot farm in France. He collected plump snails from the garden and placed them on the barbeque. Paul admired the well-mannered dogs of France who behaved under restaurant tables and wished Bluey would behave like a French dog instead of a bull-in-the-china-shop Tasmanian devil. At least he’ll eat as well as French dogs. He offered Bluey a flame-roasted escargot. As Bluey smacked his lips, Paul heard his name.

“Paul, why are you persecuting me?” he heard, and at that moment, comprehended his cruelty. Ashamed and humbled, from that day, whenever he found a snail on a flower, vine, or walkway, he picked it up and gently placed it out of harm’s way. He was transformed from a killer of snails to their protector.

His new-found pacifism didn’t stop with snails. The next day when he lifted the top off an irrigation lid, he found a family of mice, terrified at their discovery. Normally, the shovel would have been called upon to do what shovels do. He let them be. Next, he stopped setting gopher traps. Then, he became a vineyard pacifist, saying kindness towards all people begins with kindness to all creatures. The dog, however, having tasted the best of French gastronomy, continued to chew raw snails in the shell, to the point of secretly following Paul when he was on a rescue mission, devouring the snails Paul saved.

Posted by Craig Justice at 8:09 AM