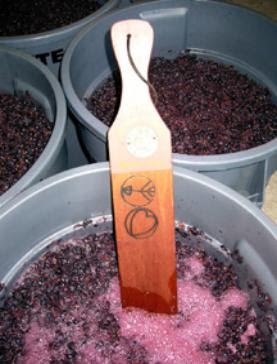 Four layers of ink from four years of making wine have seeped deep into the wood of the Virginia Tech paddle, which has now been retired until the end of August, next year. The paddle has become part of the winemaking tradition at the Blue-Merle Vineyard, and like the kid who likes to lick the brownie mix from the spatula, Bluey is always one to touch his tongue to the paddle after it has punched the cap, stirred the batch and is dripping with red nectar. Here is a "reprint" from our first musings of the paddle from http://www.winemakersjournal.com/

During the 1970’s at the Virginia Tech summer Sports Camp, the greatest honor bestowed upon campers was the wooden paddle. Much like the stripes a military cadet earns, good campers were awarded paddles (and subsequent brands) in a campfire ceremony. To be awarded a paddle came with a price. After the chosen few received their paddles at the campfire pow-wow, they were rounded up and initiated into an ancient Virginia Tech rite of passage: the fanny smack. So it was with the paddle I was awarded … no sooner had I received my paddle then my rear cheeks were baptized by a gang of fellow campers and future Hokies who rounded me up and raised welts on my hind quarters with the fine wood and a few splinters. Some thirty years later, the paddle is in my garage. The paddle and its two brands – the arrow for perseverance; the heart for sincerity – has stayed with me, through moves to Japan, California, Virginia, and back to California. Since I don’t play cricket, there hasn’t been much use for it. And when my own child has deserved a good whack, my hand alone was good enough for the job. The paddle has been dormant through the decades, taking up space, waiting for an opportunity … an opportunity to fulfill its destiny. The paddle shares the garage with a half ton of grapes which have been stomped on and crushed and are divided evenly between five food-grade rubber trashcans (i.e., fermenting vats). Yeast was pitched the day before, and during the last 24 hours, a slow, gurgling sound has emerged as carbon dioxide gas bubbles up from the grape juice, which is called “must.” The rising gas carries grape skins with it forming a “cap” – something similar to the volcanic doom of Mt. St. Helens before she exploded. The cap rises, inching up towards the rim of the container. If the top of this cap dries out, bacteria will invade which might result in the production of vinegar instead of wine. The cap must be broken and pushed back into the liquid three or more times per day for the next week. This amateur winemaker lacks the proper equipment and wonders how on earth to push this cap down? Then, he spys the Virginia Tech paddle mixed in with a shovel, hoe, rake and other instruments of gardening, and pulls it out as if reaching for the pitching wedge from the golf bag to make a 100 yard shot to the green. The cap exerts resistance as I push down with the paddle, and I never imagined that this activity would be such good exercise. So, I hereby inaugurate a new sport with the VA Tech Sports Paddle – pushing the cap down into the grape must, a necessary procedure to make wine. And the value added to the wine is a little Hokie spice from the paddle.
Posted by Craig Justice at 9:50 AM