Yikes! Gophers! What to do? 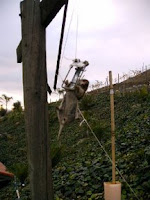 It was the gophers who fired the first salvo, when they took down the new shoot of the remnant of a 25-year old kiwi that we were bringing back to life when we took over stewardship of the land. It was a miracle -- a kiwi farm that had been abandoned for over a dozen years, and finding a kiwi shoot that emerged from underneath the mysterious "Man In The Rock". We started watering it, and to protect it from the rabbits, the queen put a white laundry hamper over it. When she came back to water a few days later, the hamper was in place, but to her shock, no kiwi. Only a gopher could have done that. Up until then, my attitude with the gophers was live and let live. But for them to attack the rare -- and defenseless kiwi, this was war.

Until last Sunday, the score was 5 to 0, the gophers leading. In addition to the kiwi, they had taken out 3 Zinfandel cuttings from the top of the hill, another Zinfandel from the fence de Lum, and one Zinfandel in the main vineyard by Bobcat Ridge (named for the Bobcat who used to prowl there). The score is now 5 - 1. We're behind in the game, but determined to catch up, using conventional weapons. We like the owls and hawks in this area, not to mention the dogs, so poison is out. We're using the standard 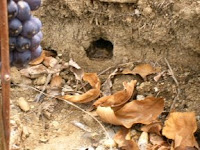 traps. In fact, with our allies the owl, the score is now 5-2, with the momentum swinging in our direction. Next stop: the "Squirelinator."
Dec. 31, 2007 -- The Squirelinator has not lived up to its name, and I have been taken in by a superlative salesman. However, Fidel is the "Gophinator" -- he caught 3 in one day by setting those traps. (His trophy hanging from the cross above.) By the way, those guinea-pig looking cute fellows are so destructive -- the offender above had his eyes -- and teeth -- on our young olive trees!
Posted by Craig Justice at 7:19 PM