Nick Thompson from the UK has an interesting story about transplanting vines at his property in France. My own experience up to now is two-fold: the first is transplanting cuttings which I had in pots. This worked well, as the vines moved from pot to field (or the fence) and took root as we were able to water them with irrigation during the summer. In the 2nd case, I dug up a first-year vine along the fence from under a large apricot tree where it couldn't get enough sun. I was surprised at how much effort it took to dig up, after being in the ground only a few months. After transplanting to a sunnier spot by the house, it began wilting, and stopped growing upwards. It is still alive, but it has not been happy. My assumption is that it will rest over the winter, get strong, and come back strong in the Spring.
Nick, tell us what happened to you. (These photos accompany Nick's story.) 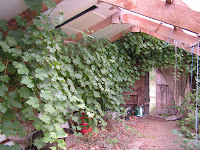 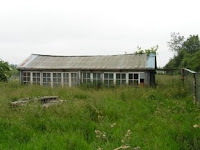 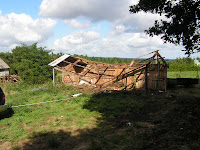 Posted by Craig Justice at 3:39 PM

Yes Craig, to set the scene, we bought an old farmhouse in Brittany, Northern France (http://maps.google.fr/maps?f=q&hl=fr&geocode=&time=&date=&ttype=&q=rubertel&sll=47.15984,2.988281&sspn=10.669878,20.43457&ie=UTF8≪=48.495134,-3.156112&spn=0.002538,0.004989&t=h&z=18&om=1) not an area renowned for its wine, complete with various barns & other buildings (pictures available upon request).
One of the outbuildings was a 'greenhouse' constructed mainly out from the windows from the house when they were replaced a few years ago ( http://www.rubertel.com/images/greenhouse.jpg ).
After 4 or 5 months we decided that the greenhouse had to be demolished, so decided to have a look inside it & found a rather magnificent vine (http://www.rubertel.com/images/vine.jpg) which appeared to be growing out of an old oil drum.
As the greenhouse had to come down, 5 of us over a couple of days unclipped the vine & discovered that in fact it was growing in the soil, so we carefully uncovered the roots (boy, did they spread out a long way) loaded the vine onto a trailer & moved it to another part of the ‘garden’ where we had prepared a hole, posts & wire.
We carefully (we thought) re-planted it & went to bed.
Up bright and early the next morning we went to see our handywork only to find the vine absolutely, totally, shrivelled up & dead.
Before we started upon the move, we figured that as the house had been unoccupied for a couple of years, which meant that the vine hadn’t been tended or watered for that time it would be pretty hardy, how wrong we were.
Anyway the greenhouse came down http://www.rubertel.com/images/Greenhouse12.JPG (that’s what SUV’s are for)

Nick, do you remember the Monty Python skit with the parrot? The punch line: "It's not dead, it's just resting!" I'm wondering if that was the same with your vine?